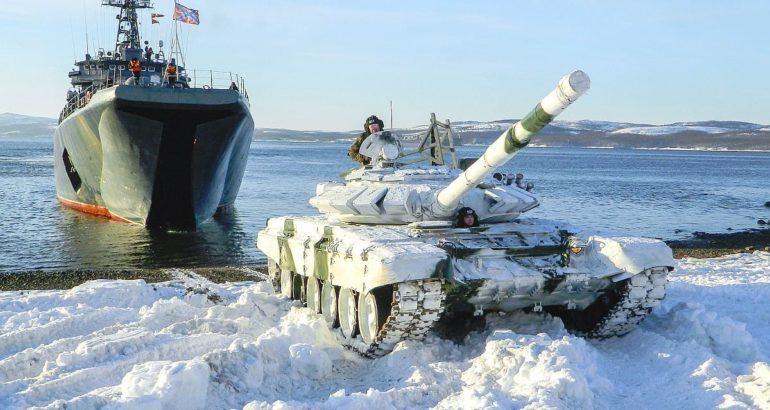 The engineering brigade of the Northern fleet will be formed in 2020, Navy sources said. It will be armed for a broad range of missions ranging from construction and restoration of infrastructure facilities to assault on reinforced positions. The brigade will comprise assault groups equipped with all-terrain vehicles, swamp buggies, bulldozers and tracklayers. The formation will also have sniffer dogs.

Naval engineering units differ from the ground ones by the ability to operate on the coast. They have to clear minefields and build drive-ins to seaborne assault landing and boarding sites.

The brigade will have units of snipers, pontoons, engineering obstacles. Pontoon units have to span bridges or temporary berths and are equipped with armored diving suits. Korsar-MP life vest is made of impermeable fabric with inbuilt soft ballistic packages. The armored panels sustain 7.62 and 5.45mm bullets fired from a distance of several meters. A human can swim 10 hours in the suit. The vest has a signal beacon.

The assault units have to approach hostile positions as close as possible under fire and are protected from bullets and fragmentation by OVR-3Sh heavy armored suits. The outfit protects the whole body of a swimmer. The combination of rigid metal, plastic and ceramic plates and flexible elements of aramid fabric produces a light suit, but it is difficult to move in it anyway.

Engineers in the armored suits will clear passes for advancing infantry, destroy obstacles and firing points and buildings. Commandos will covertly mine objects in adversary rear and stage ambushes.

The Soviet Union kept a considerable force in the Arctic, in particular, the 6th combined arms army. After 1991 it was turned into storage bases and disbanded in 1998.

The Arctic theater of warfare is distinguished by numerous islands which have to be rapidly built up in case of threat, expert Vladislav Shurygin said. “Besides, many islands in the direction are controlled by the potential adversary. The creation of a big engineering formation will enhance coastal capabilities,” he said.

The Russian military have been reforming the engineering troops since 2018. They develop from provision units into an independent assault force capable of fighting in a modern war. Previously, the engineers had to build fortifications, clear roads and span bridges. Now they also have to fight in cities, lay mines and clear terrain of hostile explosives.

Engineering assault battalions are created in all brigades of district and navy subordination. Engineering army regiments get the same companies. Officers for the engineering units have been trained since 2014 in the Tyumen Higher Military Engineering School. The first graduates are now coming to serve in the troops, the Izvestia said.