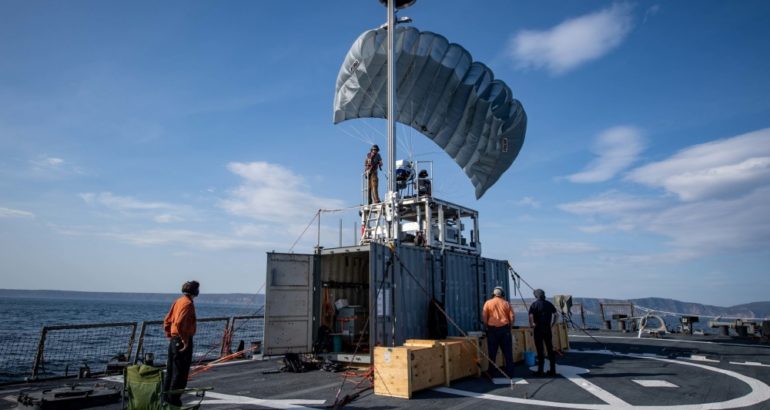 REP (MUS) 2019 was held in September off Portugal. The annual unmanned exercise provides an opportunity to determine how well each country’s maritime unmanned systems technologies could work in conjunction with others.

TALONS stands for Towed Airborne Lift of Naval Systems. It is a large, tethered parafoil kite that can carry payloads from a host vessel to 1,000 feet in elevation or more. During REP (MUS), TALONS carried a radar and radio-relay system provided by the United Kingdom in order to extend communication ranges between unmanned vehicles, ships and shore points.

The TALONS project started back in 2015 as part of DARPA’s Phase 1 research for Tern, a joint program between DARPA and the U.S. Navy’s Office of Naval Research (ONR). Towed behind boats or ships, TALONS could persistently suspend intelligence, surveillance, reconnaissance (ISR) instruments and communications payloads of up to 150 pounds at altitudes between 500 and 1,500 feet above sea level—many times higher than current ships’ masts—greatly extending the equipment’s range and effectiveness.

TALONS’ testing started in 2015. The first test aboard a U.S. Navy vessel, the USS Zephyr, a 53-meter Cyclone-class patrol coastal ship, took place in 2017. But REP (MUS) 2019 was the first occasion for the U.S. Navy to test the innovative system aboard a much larger surface combatant.

According to a Naval Surface Warfare Center Carderock Division press release, while the TALONS team was successful in completing the exercise objective during REP (MUS) 2019, it was not without some significant challenges. Early in the event, TALONS crashed into the water and the team needed to work through the night in order rebuild and be ready to fly the next day.