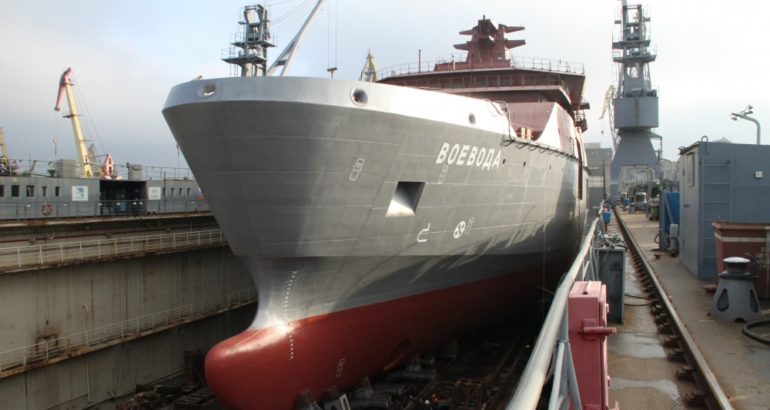 The ceremony was attended by representatives of the United Shipbuilding Corporation, and the customers — Industry and Trade Ministry and Transport Ministry.

“We are grateful to the customers, designer and everybody who participated in the project and prepared the vessel for floating. I am sure the trials of the Voevoda will go on a high level and all requirements of the customer will be fulfilled. The vessel will be handed over to the customer next year,”

The Voevoda is the lead vessel of project 23700 designed by Severnole Bureau. The contract was signed in December 2016 and the ship was laid in April 2017.

Project 23700 is designed for rescue operations and transportation of small rescue means. It can carry four boats and two helicopters. The displacement is 7500 tons. The vessel is 111 meters long and 24 meters wide. The speed is 22 knots and the range is 5000 miles.

According to Russian daily newspaper Kommersant this vessel may not be a real rescue vessel. Shipbuilding industry sources quoted by the newspaper “expressed doubts that the ship will be used for rescue missions, as claimed by” Yantar. Assumptions for the actual purpose of this ship ranged from a “special dual-use vessel” to a “yacht for dignitaries.”

Yantar Shipyard documentation published in 2018 show that the Project 23700 vessel is equipped with superior facilities, which include eight residential units with a bedroom, a bathroom and an office, a conference room, a passenger cabin with a pantry…