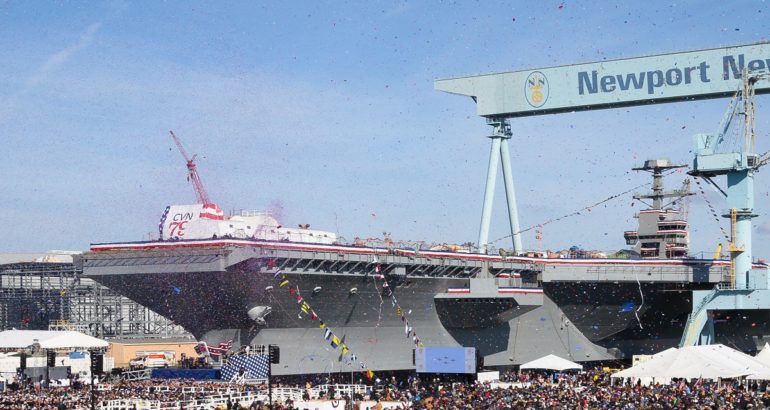 Capt. Todd Marzano, Commanding Officer of PCU John F. Kennedy emphasized the importance of this moment during the life of the aircraft carrier, which is 67 percent complete. “CVN 79 has come a long way since I first observed initial construction in the dry dock back in 2015, following the keel laying,” said Marzano. “I’m incredibly honored, humbled, and excited to be given the opportunity to lead such an amazing team of high quality crew members.”

The new technology and warfighting capabilities that the John F. Kennedy brings to the fleet will transform naval warfare, supporting a more capable and lethal forward-deployed U.S. naval presence. In an era of great power competition, CVN 79 will serve as the most agile and lethal combat platform in the world, with improved systems that enhance interoperability among other platforms in the carrier strike group as well as with the naval forces of regional allies and partners.

“We are here to celebrate America’s military might and the brawn behind it. We are here to celebrate innovation, pride and perseverance that is the American way, and we are here to honor the patriot who inspired it. I speak for every Newport News shipbuilder — 25,000 strong — and the thousands of suppliers across the nation who support us when I say that we are proud to build John F. Kennedy.”

“This ship will represent the ideals he lived by – courage, sacrifice and belief in freedom – and it will help make real his vision of a more just America and a more peaceful world,” Kennedy said. “I’m so proud to be sponsor of this ship and to join with all of you to bring her to life. I look forward to being part of her odyssey and of her extended family. Most of all, I hope she will carry my father’s spirit with her as she sails, his leadership in wartime, his courage in crisis and his commitment to the hard and steady work of building peace.”