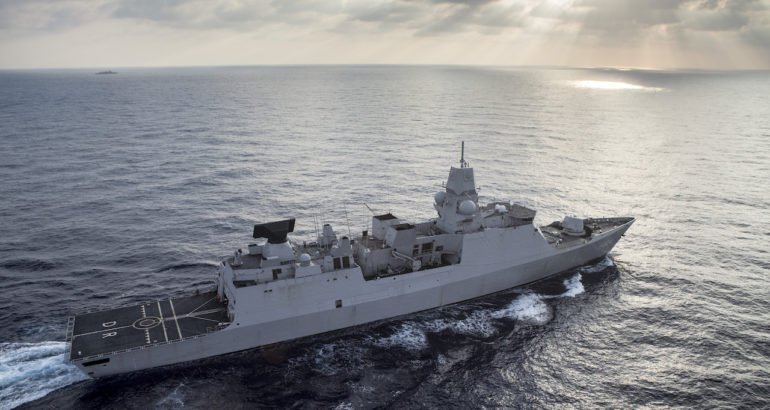 The Royal Netherlands Navy (RNLN) frigate De Ruyter (F804) will leave for a six months deployment in the Persian Gulf starting on January next year, the Dutch government announced on November 29.

« To enhance maritime security in the Gulf region, from the end of January to the end of June 2020 the Netherlands will make a military contribution to the French-initiated, European-led mission in the Strait of Hormuz (EMASOH), » the Dutch government said in a statement.

« Tensions in the Gulf region have risen steadily higher in recent months. Incidents that disrupt shipping and raise uncertainty have direct consequences for the world economy including for Dutch shippers. This has an immediate impact on Dutch economic and security interests, » it added.

The EMASOH takes place in the western part of the Gulf of Oman, the eastern part of the Arabian Gulf and the Strait of Hormuz. The RNLN contribution will consist of the frigate De Ruyter with an onboard NH90 NFH helicopter to EMASOH and to second a number of staff officers to its headquarters.

« We will monitor the maritime activities to promote free passage. [The Strait of Hormuz] is an important economic strait through which around 35% of the petroleum transported by ship passes through. It is also a political signal that we are sending out: European presence. All efforts are aimed at preventing escalation, » the De Ruyter frigate commander, Theo Klootwijk, explained on the Dutch Ministry of Defense website.

The De Zeven Provinciën-class frigate De Ruyter is an advanced air-defense vessel in service with the RNN since 2004. She was then the third ship of her class to be commissioned. An antiaircraft warfare vessel, the De Ruyter is fitted with 40 Mk 41 Vertical Launch Systems which are used to house and launch Evolved Sea Sparrow and SM-2 Block IIIA missiles.