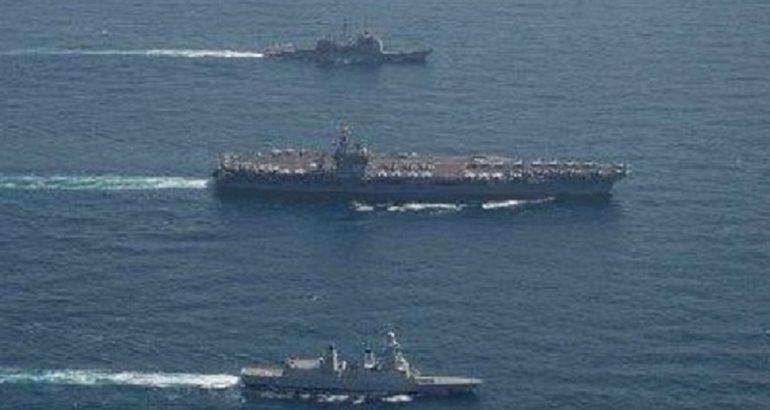 “The French have outstanding naval capabilities,” said Capt. Edward Crossman, commanding officer, USS San Jacinto. “We look forward to any chance to work with them as an opportunity to learn and fine-tune our tactics and procedures. It’s an absolute win for San Jacinto’s “gunslingers” to operate with our partners in Forbin. This training makes us stronger as an allied force, dedicated to maintaining regional stability and sustaining freedom of the seas.”

The three ships have been at sea for extended periods of time. As a precautionary measure against the global pandemic coronavirus, no cross-deck of personnel between the ships occurred during the exercise. The close relationship between the U.S. and French navies and familiarity with each other’s procedures supports execution of rapid integration exercises such as this.

IKE Strike Group is deployed to the U.S. 5th Fleet area of operations conducting maritime security operations in international waters alongside our allies and partners.

FS Forbin (as well as the Royal Netherlands Navy frigate De Ruyter) are currently under operational deployed to the Persian/Arabian gulf as part of Operation AGENOR, the military component of the EMASOH initiative.

This operation aims to strengthen Europe’s ability to assess the situation and monitor maritime activity, and to guarantee freedom of navigation in the Arabian Persian Gulf and the Strait of Hormuz.