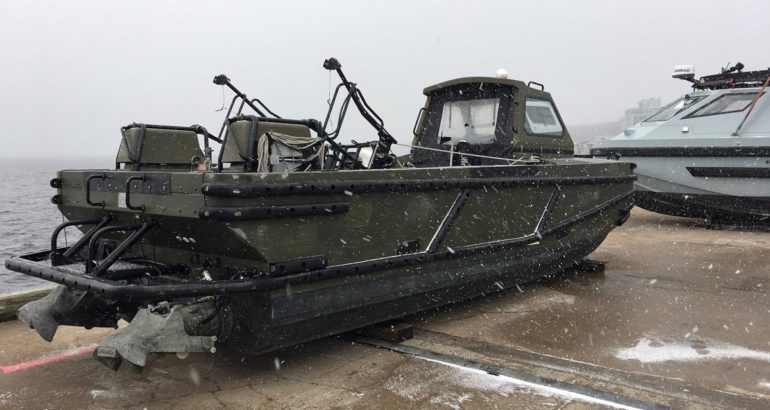 The SWEEP minesweeper system – designed to defeat the threat of underwater sea mines and safely clear sea lanes – has recently proven its capabilities during two weeks of cold-weather sea trials.

The SWEEP minesweeper system – designed to defeat the threat of underwater sea mines and safely clear sea lanes – has recently proven its capabilities during two weeks of cold-weather sea trials.

Developed by Atlas Elektronik (AEUK) as part of a £13 million contract, the autonomous vessel can pull three coil auxiliary boats behind it, with each emitting magnetic, electric and acoustic signals that can detonate a variety of mines.

SWEEP is a complimentary system used to deal with mines that cannot be dealt with using traditional mine-hunting tactics and, having already proven to be capable of defeating the threat of modern digital mines in normal weather conditions, cold-weather trials were recently conducted to ensure its capability.

“Minesweeping has a long history of use as part of a mixed mine countermeasures capability, complementing mine hunting in difficult environments. The UK is currently trialling a ‘toolbox’ of autonomous mine hunting and minesweeping modules hosted on unmanned surface vehicles. This successful trial of an innovative and autonomous minesweeping capability in extreme weathers means we are a step closer to delivering a truly transformational capability to the Royal Navy.”

These latest trials were used to test the system’s cold-weather performance and help to inform the UK’s future unmanned minesweeping capability. The system was tested against a number of performance requirements, for example magnetic, acoustic and electrical influence generation, how well it cleared mines in sub-zero temperatures, whether the autonomous system could successfully avoid other vessels and the overall system performance in colder conditions that could be experienced for military operations.

The trials, led by the Ministry of Defence and conducted by the Royal Navy, took place at the Bedford Basin, Nova Scotia in Canada, with logistic support provided by the Canadian Forces Maritime Warfare Centre.

“I have no doubt the valuable information obtained from these cold-weather Trials in Canada will be a key contributor to the manufacture of a robust and reliable operational minesweeping system in the near future, reinstating a minesweeping capability into the Royal Navy.”

Operated remotely or in the portable command and control cabin, the mine countermeasures and Hydrographic Capability Combined Influence Minesweeping system is the Royal Navy’s first autonomous unmanned surface vessel demonstrator that significantly reduces the risk to crew members in pressured and time-constrained operations, and proved its ability to operate successfully in cold conditions during the recent trials.