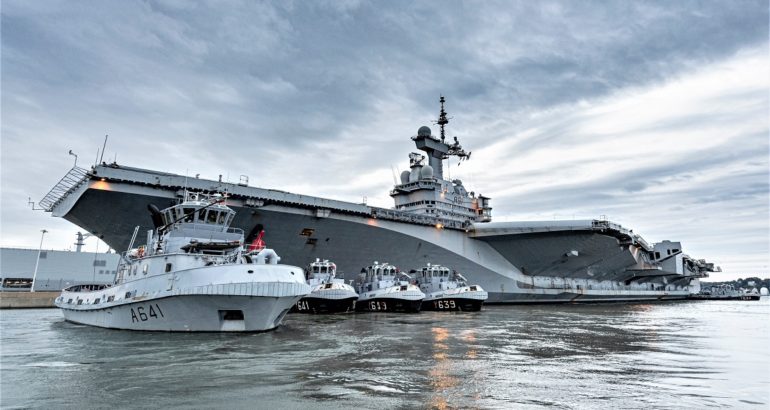 COVID-19 Aboard French Aircraft Carrier: 98% of the Crew Now Cured

98% of the sailors aboard French Navy (Marine Nationale) aircraft carrier Charles de Gaulle (and its strike group) are now cured.

Nearly two thirds of the Charles de Gaulle’s crew -1,046 sailors out of 1,760 – were contaminated. As of last week, 20 sailors were still ill, including two hospitalized, one of them in intensive care.

A French Navy spokesman confirmed to AFP on May 4. 2020 that almost all the sailors of the Charles de Gaulle have been cured:

“There are only two sailors left in hospital, including a naval officer in intensive care and a second sailor under surveillance.18 other sailors are still in lockdown in Toulon, in a military compound.”

“98% of the positive cases of the aircraft carrier strike group are cured.”

Of the 2,400 crew members composing the carrier strike group, 1,081 sailors had tested positive.

The first one, of an epidemiological nature, is intended to gather as much health information as possible to try to understand the process by which the virus spread within the aircraft carrier. The aim is to disseminate the results of this investigation to the entire scientific and medical community in order to advance our understanding of this epidemic and how to combat it.

There is also a command investigation being conducted by the French Navy. It is complemented by an inspection that is conducted under the authority of the Joint Chief of Staff. “We need to know what orders were given, what was the understanding and the situational awareness at the time those decisions were made.” Florence Parly said.

Results of these investigations should be made public this week.

The aircraft carrier and flag ship of the French Navy was deployed on “Mission Foch” since January when decision was made to send it back to base early following suspicion of several Covid-19 cases among its crew members in early April. Initial testing upon arrival revealed that one third of the CSG sailors tested positive.