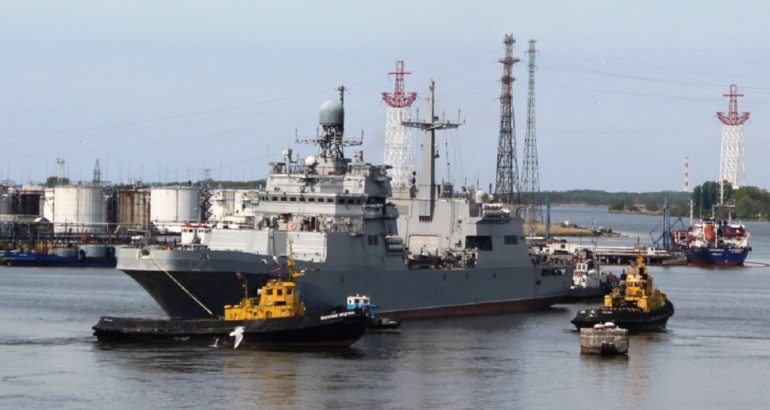 “The Petr Morgunov returned from the Baltic Sea to complete factory running trials. The final stage will last until early June. The warship suspended trials in late March and returned to Yantar Shipyard for repairs,” it said.

Components of the hydraulic system broke down during trials. The malfunction has been remedied.

The warship will train artillery fire at the final stage of running trials. It is to begin acceptance trials in early June.

The ‘Petr Morgunov‘ is the first serial warship of the project. The ‘Ivan Gren’ lead ship has been operational since June 2018.

Project 11711 big landing ships are designed for landing operations on hostile territory, hardware and equipment transportation. In peacetime they engage in humanitarian operations. The ro-ro ship has a bow to stern through passage for armor. It has a two-island superstructure and a hangar in the stern for one helicopter. The extendable construction makes the hangar fit for two helicopters. The hull and superstructure are made of steel. The ship can carry 13 tanks or 36 armored personnel carriers. The marine strength is 300-380 men. The ships can carry 1500 tons of cargo instead of the landing force. It can carry one-two Ka-29 helicopters or Ka-52K. Artillery arms include one 30mm AK-630M-2 Duet and two 30mm AK-630M. The displacement is 5000 tons, the length is 120 meters and the width — 16.5 meters. The speed is 18 knots, the cruising capacity is 30 days and the crew comprises a hundred men.