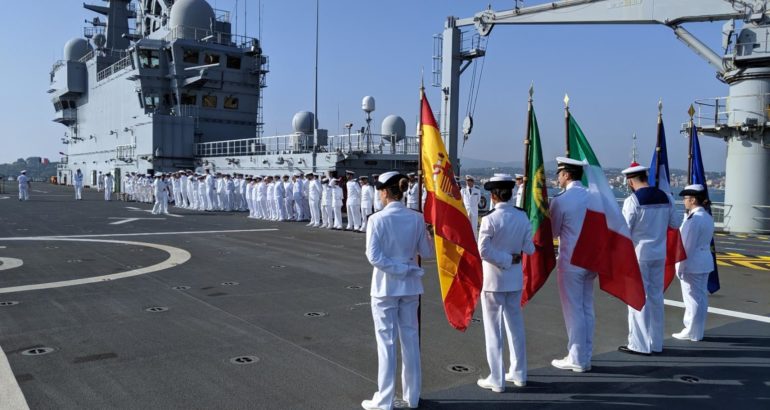 The Spanish, French and Italian Defence and Foreign Affairs Ministers met in Lisbon on May 15. 1995, and signed the founding treaty for the creation of the European Maritime Force (EUROMARFOR).

They were joined a few months later by Portugal. EUROMARFOR was born as a result of the Petersberg Declaration (1992) and is a strong and unprecedented military partnership between four European Union and NATO member states. For 25 years, this joint naval force has been conducting maritime security, humanitarian and crisis management missions.

Last September, France took command of the Force. EUROMARFOR is commanded by the current commander of the naval action force, Vice-Admiral Jean-Philippe Rolland. In addition to regular training courses involving the four allied navies, EUROMARFOR has taken part in several large-scale operations during its existence, whether under a European Union, NATO or UN mandate. The fight against terrorism in the Mediterranean in 2002, peacekeeping off the coast of Lebanon in 2008, or the fight against piracy in the Indian Ocean between 2011 and 2015 as part of the European operation Atalanta are all examples of the activation of this multinational force.

While France is leading EUROMARFOR for the fourth time, the Vice-Admiral Rolland recalls the will to “actively participate in the securing of maritime areas”, particularly in the Mediterranean, an area of major strategic interest. As Admiral Prazuck, Chief of Staff of the French Navy, points out, this ambition in the service of the defence of Europe’s offshore areas is based on an “organisation that makes it possible to bring together Italian, French, Spanish and Portuguese ships very easily and flexibly”.

The French Navy (Marine Nationale) took command of the EUROMARFOR during a ceremony held aboard Mistral-class LHD Tonnerre on September 19, 2019 in Toulon.

The European Maritime Force (EUROMARFOR) remains open to all European Union (EU) members. Primarly dedicated to the EU, it can be employed within the framework of other international organizations such as the UN, NATO, OSCE or other multinational coalitions.

There is also the possibility to employ the force autonomously, upon common decision and mandate from the member nations.

Euromarfor may be assigned three types of missions: