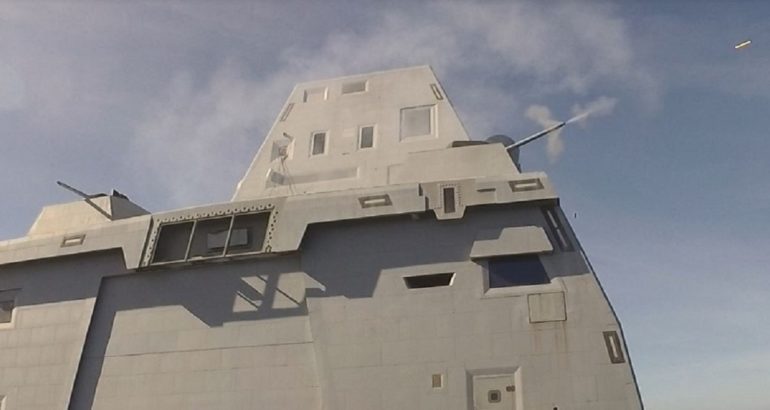 “The privilege of being a ‘first-in-class’ ship includes having the opportunity to systematically conduct testing across the breadth of systems installed onboard the ship,” said Capt. Andrew Carlson, Zumwalt’s commanding officer. “The real plus is conducting those tests, such as today’s live fire with the Mark 46 GWS, which provide tangible evidence of combat capability maturation.”

The Mark 46 GWS is a remotely operated naval gun system that uses a 30 mm high velocity cannon, a forward looking infrared sensor, a low light television camera, and a laser rangefinder for shipboard self-defense against small, high speed surface targets. It is a program of record already successfully installed and operated on LPD-17 and LCS class ships. The test firing on board Zumwalt was the first large caliber weapons firing event for the Zumwalt Class Destroyer Program and occurred only three weeks after the Navy officially accepted delivery of the Combat System.

Structural test fires assess structural and electrical components of the ship against shock and vibration of the weapon firing, as well as measuring any potential hazards to personnel or degradations to adjacent equipment as a result of firing live ordnance. The tests are a coordinated effort between the Zumwalt Class Destroyer Program Office, the U.S. 3rd Fleet, Commander, Naval Surface Forces, U.S. Pacific Fleet, and the Naval Sea Systems Command (NAVSEA) Surface Warfare Centers located in Dahlgren, Virginia, Port Hueneme, California, and Indian Head, Maryland.

“Today’s event is the first in a chapter of live fire test events over the next year that will prove the lethal capability that these ships will bring to the fight,” remarked Lt. Cmdr. Tim Kubisak, the Zumwalt Test Officer for the Program Executive Office for Integrated Warfare Systems, embarked on Zumwalt.

The Zumwalt-class destroyer is designed and built to execute multiple maritime missions including deterrence and power projection. The ships’ stealth and ability to operate in both the open ocean and near-shore environments creates a new level of battlespace complexity for potential adversaries.

Zumwalt is 100 feet longer and 13 feet wider than the Arleigh Burke-class destroyer at 610 feet long, providing the space required to execute a wider array of surface, undersea, and aviation missions.

The Mk 46 Mod 2 is based on the Mk44 Bushmaster II 30mm chain gun found on armored vehicles. It is produced by General Dynamics to give warships protection against small, high-speed surface craft. A Mk 46 turret consists of the 30 mm chain gun, a forward looking infrared (FLIR) sensor, a low light television camera, and a laser rangefinder. The guns fire at 200 rounds per minute and are fed by a 400-round magazine through 200-round dual feeds. This 30mm naval gun system is fitted aboard the San Antonio-class LPDs as well as the Freedom and Independence-class littoral combat ships (as part of the LCS’ surface warfare package).

The Zumwalt-class destroyers were originally set to be fitted with Mk 110 57mm naval guns by BAE Systems Bofors. In 2012 however, the U.S. Navy decided to swap the Mk 110 with the Mk 46 GWS.