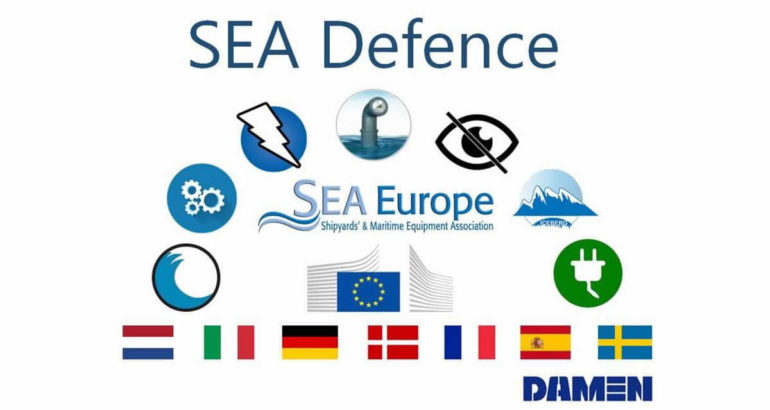 Damen Shipyards Group, as coordinator of the SEA Defence (Survivability, Electrification, Automation, Detectability, Enabling Foresight of European Naval Capabilities in Extreme conditions) project, is proud to announce that the European Commission has selected this proposal within the European Defence Industrial Development Programme (EDIDP 2019).

The EDIDP, which paves the way for the European Defence Fund, focuses on the promotion of a strong and innovative defence industry as well as on raising the EU’s autonomy and technological leadership in defence. Sea Defence’s proposal will now enter the next phase towards award of the project, which is likely to be effective later this year.

Unique in this project is that the leading European Naval Yards, brought together within SEA Naval, a working group of SEA Europe association, have joined efforts to identify future technological challenges and opportunities in the research and capability domains for the next generation naval platforms.

The consortium consists of the following partners:

The SEA Defence project will conduct a feasibility study in order to prepare a roadmap of technologies to be included in the next generation of naval platforms and pursued in further European development programmes. The study will address the following issues: lower detectability, higher survivability against modern surface and subsurface threats including against high-speed and swarming threats, reduction of ship motions, improved electric power generation and storage, capability to operate in extreme climates, topside and increased autonomy and automation. For each area, the project will map the state-of-the-art technologies, and will assess the impact of ship integration on capabilities, budget and interfaces. It will also provide recommendations in order that the European naval shipbuilding sector can realise innovations ready for the next generation naval platforms, from their design or during their lifecycle.

Damen Shipyards Group is grateful to the European Commission for bringing this opportunity of collaboration to the European naval industry. The project’s formal awarding procedure now enters the final stretch to fulfil several administrative obligations, with a view to start off in the next months.