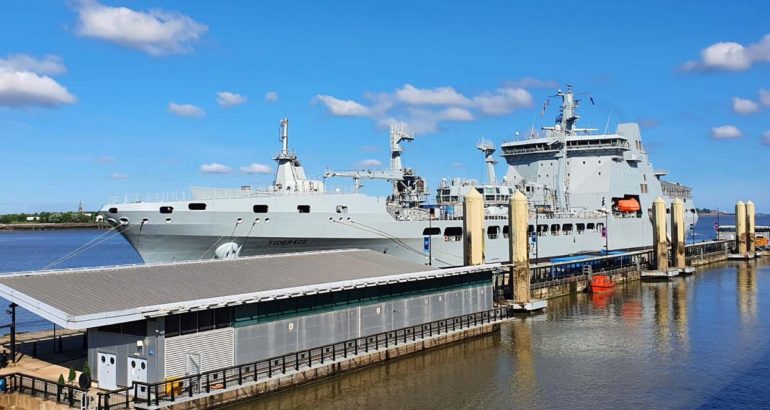 Royal Fleet Auxiliary's Tide-class Tanker RFA Tiderace left the best berth in Liverpool and returned to sea for trials after a revamp on Merseyside.

The tanker completed an overhaul in the hands of Birkenhead’s world-famous Cammell Laird yard on the Mersey which ended on a jetty typically used by passenger liners or warships paying high-profile visits to the port (such as HMS Prince of Wales which drew massive crowds on her debut to her affiliated city).

Tiderace is the second of four Tide-class vessels – all of which are now in service. Principally designed and built to provide the UK’s new Carrier Battle Groups (centred around HMS Queen Elizabeth and Prince of Wales) with fuel to power the ships, F-35 strike fighters and helicopters, Tiderace has been in the hands of Cammell Laird’s shipyard since last year.

Tiderace is one of a number of vessels being revamped by the Birkenhead yard as part of a wider ten-year/£619M contract to maintain, overhaul and refit RFA ships. Cammell Laird’s recently took the opportunity to complete the final work across the river in both Canada Docks and the Cruise Terminal freeing up valuable dock space in their main yard.