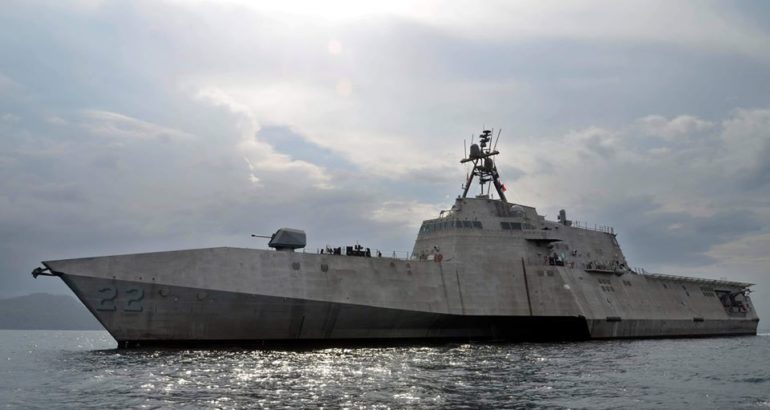 The Navy commissioned Kansas City administratively via naval message, due to public health safety and restrictions of large public gatherings related to the coronavirus pandemic and transitioned the ship to normal operations. The Navy is looking at a future opportunity to commemorate the special event with the ship’s sponsor, crew, and commissioning committee.

“This Independence-variant littoral combat ship will continue our proud naval legacy and embody the spirit of the people of Kansas City,” said Secretary of the Navy Kenneth J. Braithwaite. “I am confident the crew of the USS Kansas City will extend the reach and capability of our force and confront the challenges of today’s complex world with our core values of Honor, Courage and Commitment.”

“Like other littoral combat ships, Kansas City brings speed and agility to the fleet,” said Brown via naval message. “Congratulations to Kansas City’s Captain and crew for all of your hard work to reach this milestone. You join a proud Surface Force that controls the seas and provides the Nation with combat naval power when and where needed.”

Tracy Davidson, the ship’s sponsor, offered congratulations to everyone who played a role in delivering USS Kansas City to service.

“I am so proud of USS Kansas City and her crew, and everyone involved, for all the tremendous work they’ve done to bring this ship to life. Their dedication to our nation and the Navy is very much appreciated,” Davidson said.

“I am privileged to be a part of this ship honoring Kansas City and look forward to remaining connected to USS Kansas City as her legacy grows, wherever she may sail.”

“The caliber of crew required to prepare a warship entering the fleet is second to none,” Zamberlan said. “This is even more impressive aboard an LCS, where every member of the minimally manned team is required to fulfill multiple roles and excel at all of them to get the job done.

“This crew has exceeded expectations in unprecedented times and I could not be prouder to be their captain.”

Kansas City is the 11th of the Independence-variant to join the fleet and second ship to be named for Kansas City. The name Kansas City was assigned to a heavy cruiser during World War II. However, construction was canceled after one month due to the end of the war.

The name Kansas City was also assigned to the Wichita-class replenishment oiler AOR-3 in 1967. This ship saw service in the Vietnam War and Operation Desert Storm and was decommissioned in 1994.

The littoral combat ship is a fast, agile and networked surface combatant, and the primary mission for the LCS includes countering diesel submarine threats, littoral mine threats and surface threats to assure maritime access for joint forces. The underlying strength of the LCS lies in its innovative design approach, applying modularity for operational flexibility.

Fundamental to this approach is the capability to rapidly install interchangeable mission packages (MPs) onto the seaframe to fulfill a specific mission and then be uninstalled, maintained and upgraded at the Mission Package Support Facility (MPSF) for future use aboard any LCS seaframe.