You are at :Home»News»French Navy’s Next Generation Landing Craft Taking Shape 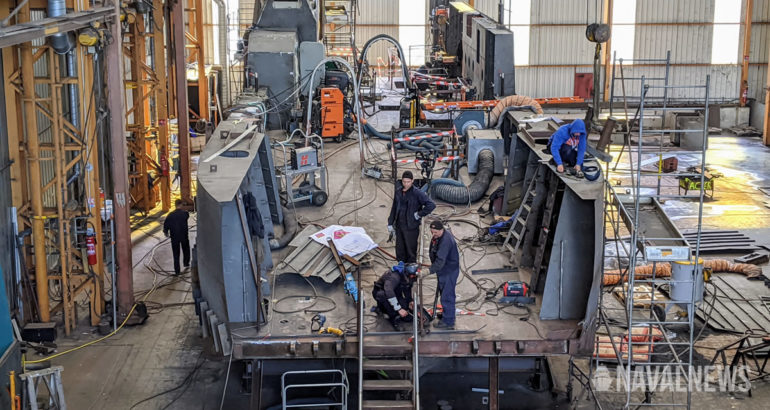 The first EDA-S, “Arbalète”, at an advanced stage of construction at Socarenam shipyard in St Malo in June.

The next generation of landing craft for the French Navy (Marine Nationale) known as EDA-S are taking shape at Socarenam shipyard in St Malo (Brittany) with CNIM acting as the main contractor.

As we reported previously, construction on the first two EDA-S (for “engins de débarquement amphibie standards” in French) started in October 2019 following a contract awarded by the French Armament General Directorate (DGA) in January last year for the construction of 14 new LCU type landing craft to replace the ageing “CTM” of the French Navy.

Naval News was on site, at the Saint Malo shipyard, a few weeks ago and we could see the first two craft at an advanced stage of construction. As with most industry programs, however, we learned that the construction schedule has been slightly impacted due to the current pandemic: While sea trials were set to begin in June and delivery expected to take place at the end of the summer, these milestones have been pushed back by about four months. Builder sea trials are now set to begin in late October/early November for the first ship while both vessel are planned to reach Toulon naval base (in Southern France) in late December2020 or early January 2021.

Once delivered in Toulon, French Navy sailors will follow a formation to familiarize themselves with the new landing craft. The first two EDA-S will then be thoroughly tested for amphibious operations: They will be tested and qualified with the French Navy Mistral-class LHD as well as nearly all vehicles of the French Army (Armée de Terre).

Production of four more EDA-S will start at the same shipyard in 2021 with a delivery set for 2022. By the end of 2022, a total of six landing craft will be delivered to the French Navy as part of the first tranche. A second tranche for eight more EDA-S will follow. Xavier Montazel, Defense & Maritime Director at CNIM, previously told Naval News that the two year gap was decided by the customer to allow the French Navy plenty of time to test and familiarize itself with the new ship to shore connector. Following the qualification test phase in 2021, the French Navy may request some minor modifications in the design features of the EDA-S. If this was the case, those modifications would be applied directly to the following four landing craft, hence the two years gap.

All EDA-S will be named after medieval weapons such as Glave, Sword, Trident… The first-in-class craft will be named Arbalète (French for crossbow). Some of these names were previously used for French Navy patrol vessels known as the Trident-class fast patrol boat.

During our visit at the shipyard, we saw first hand the unique hull shape of the EDA-S featuring two distinctive channels called “propeller tunnels” each housing a ducted propeller. According to CNIM naval architect Nicolas Buleon, this hull type called a “cathedral hull”.

The cathedral hull configuration tends to result in a very broad bow; many boats featuring this hull type have a completely rectangular shape, which is the case of the EDA-S. This provides the maximum cargo or working space for a given length and beam as required for landing craft. The hull shape is also very stable compared to a conventional v-shaped bottom.

The Ducted propellers have better efficiency and are also more resistant when the landing craft is beached.

“The EDA-S hull is hybrid relative to our specific landing craft particularities which are a very low draft, the ability to get in a well deck, the ability to beach, the bow and stern ramps… To put it simply, our design combines a cathedral hull forward with two tunnel propellers aft. The combination of these two features brings improved hydrodynamics compared to a traditional landing craft, while maximizing the thrust efficiency at the stern in an area with very little draft.”

The naval architect added that the first landing craft to feature a tunnel propeller was the WWII era Higgins boat LCVP. 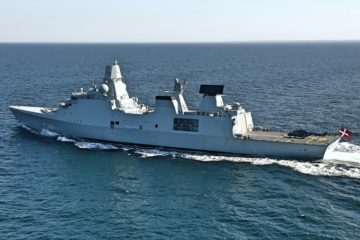