Home» News»Pakistan Inducts Newest Warship, PNS Yarmook
On July 13 the Pakistani Navy held a ceremony in Karachi to mark the induction of its newest corvette, the PNS Yarmook.

On July 13 the Pakistani Navy held a ceremony in Karachi to mark the induction of its newest corvette, the PNS Yarmook. Preparations for the ceremony were observed from an unusual perspective.

On July 13 the Pakistani Navy held a ceremony in Karachi to mark the induction of its newest corvette, the PNS Yarmook. The Chief Guest, Chief of the Naval Staff (CNS) Admiral Zafar Mahmood Abbasi, said that is an important milestone for the Pakistani Navy. He is reported to have said that PNS Yarmook will act as force multiplier to safeguard maritime interests of Pakistan.

This was the induction ceremony following the ship’s arrival in Pakistan. It was commissioned at the builder, Damen, Romania, on February 15. The ship then made a goodwill visit to Golcuk in Turkey during its delivery voyage, on March 7.

A second Yarmook class corvette, PNS Tabuk, is under construction at Damen in Romania and is expected to be delivered this year. 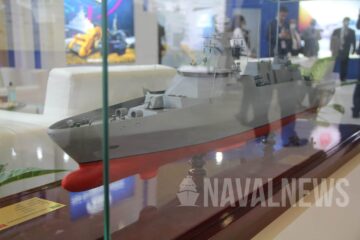