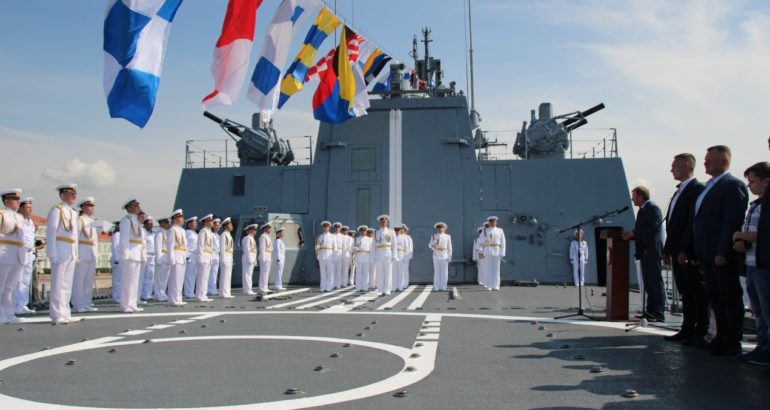 Commissioning ceremony of the Project 22350 frigate "Admiral of the Fleet Kasatonov" in St. Petersburg, 21.07.2020. Russian Ministry of Defense picture.

Shipyard acting CEO Igor Orlov said it was a historic week for the enterprise which also laid the Admiral Yumashev and the Admiral Spiridonov frigates. It is building six warships of project 22350.

Adviser to the Director General of the United Shipbuilding Corporation Viktor Chirkov said project 22350 warships use the latest technologies and had sailed round the world.

Frigates of project 22350 are designated to fight submarines and warships in oceans and seas and to repel air attacks both independently and within formations. The hull of the frigates is flush-decked. It has a three-island superstructure, one mast-turret and one steel funnel. Stealth technologies were used in the construction to make the warship practically invisible for the radars of the potential adversary. Full displacement is 5000 tons, the length is 135 meters. The speed is 29 knots. The crew comprises over 170 men. Diesel gas-turbine power plant has a capacity of 65000 horsepower. It can carry Ka-27 helicopter or its modifications.

The main weapons comprise two 16-cell universal vertical launchers 3S-14 for Kalibr missiles. The fourth and fifth frigates will be armed with three 24-cell launchers which can also fire Onix missiles and Tsirkon in future.