A USAF B-52 Stratofortress bomber participated in a maritime integration exercise with the USS Nimitz and USS Ronald Reagan carrier strike groups in the South China Sea.

One B-52 Stratofortress bomber from the 96th Bomb Squadron, 2nd Bomb Wing, Barksdale Air Force Base, Louisiana, took off from home station and participated in a maritime integration exercise with the USS Nimitz and USS Ronald Reagan carrier strike groups in the South China Sea before landing at Andersen Air Force Base, Guam.

The B-52 flew the 28-hour mission to demonstrate U.S. Indo-Pacific Command’s commitment to the security and stability of the Indo-Pacific region.

This was part of a bomber task force dynamic force employment used by U.S. Strategic Command to conduct training with and in support of Geographic Combatant Commands efforts to help maintain global stability and security.  These type of missions support the National Defense Strategy’s objectives of strategic predictability and operational unpredictability.

“Bomber Task Force demonstrates U.S. capability to rapidly deploy to a forward operating base and execute long-range strike missions,” said Lt. Col. Christopher Duff, 96th Bomb Squadron commander. “This sortie demonstrates our ability to reach out from home station, fly anywhere in the world and execute those missions, rapidly regenerate from a forward operating base and continue operations.”

During the mission, the B-52 aircrew tested and assessed command and control capabilities to inform the development of contested and degraded communication tactics, techniques and procedures to ensure seamless joint interoperability.

“As we operate throughout the Indo-Pacific theater, our Fleet units continue to seek out every opportunity to strengthen our capabilities and proficiency at conducting joint, combined, all-domain operations with our partner teams,” said U.S. Navy Cmdr. Joshua Fagan, Task Force 70 Air Operations officer. “Some of the recent events bringing Air Force B-52s and B-1s, Navy aircraft, and our ships at sea together on shared networks in support of integrated missions have been good opportunities for us to exercise the joint mission planning and coordination processes that we depend on to operate safely and effectively out here.” 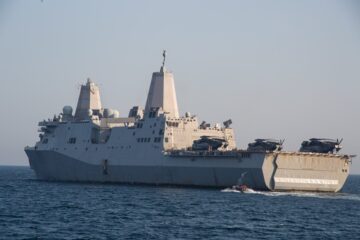 Lorenzo Tual 15 Jun 2021
BAE Systems has received a $90.2 million contract from the U.S. Navy for the maintenance and modernization of the amphibious transport dock USS San Diego.

Martin Manaranche 14 Jun 2021
At a ceremony on its Philadelphia campus and under the backdrop of the Stars and Stripes, Leonardo officially delivered the first TH-73A training helicopter to the U.S. Navy earlier on June 2021.