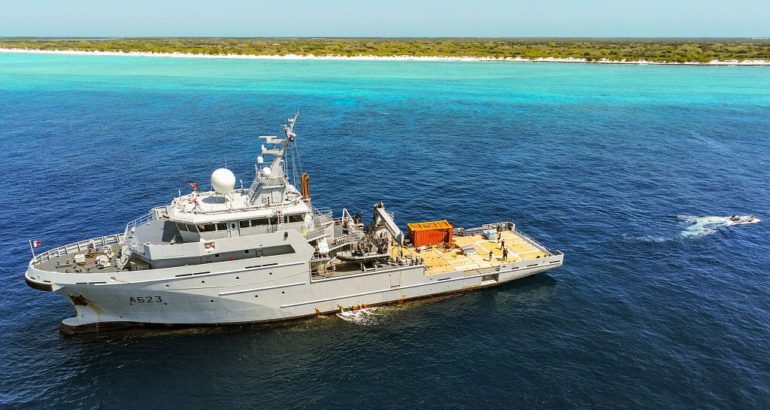 The French Navy (Marine Nationale) D'Entrecasteaux-class multi-purpose vessel "Champlain" has been deployed to assist with pollution control efforts in Mauritius linked with the ongoing oil spill of MV Wakashio.

The 300-metre-long Panamanian-registered MV Wakashio, carrying 200 tons of diesel and 3,800 tons of fuel oil, ran aground on a coral reef off the Indian Ocean island on 25 July and is now spilling fuel oil into the surrounding water.

Local authorities have reported a large crack in the hull on 6 August and significant oil leak as a consequence. The same day, Mauritian authorities asked France for material and human assistance to fight the marine pollution event. Réunion island, a French overseas department, located just 200 Km away, is home to several French military units including a naval base.

The French vessel set sails on 8 August with absorbent booms and offshore floating containment booms. The same day a CASA CN-235 tactical military transport aircraft started dispatching pollution control equipment to Mauritius. A liaison officer from the French Navy and marine pollution experts from Reunion were also sent to Mauritius, in order to provide their technical and operational expertise to the Mauritian authorities.

The French authorities said they remain attentive to the development of the situation and will support the Mauritian government if it so requests.

The French defense procurement agency (DGA) placed with Kership an order for three vessels of the d’Entrecasteaux-class on December 30, 2013. It also signed a six-years maintenance contract with Naval Group. Option for a fourth vessel was lifted in May 2015, with the order formally placed in early 2017.