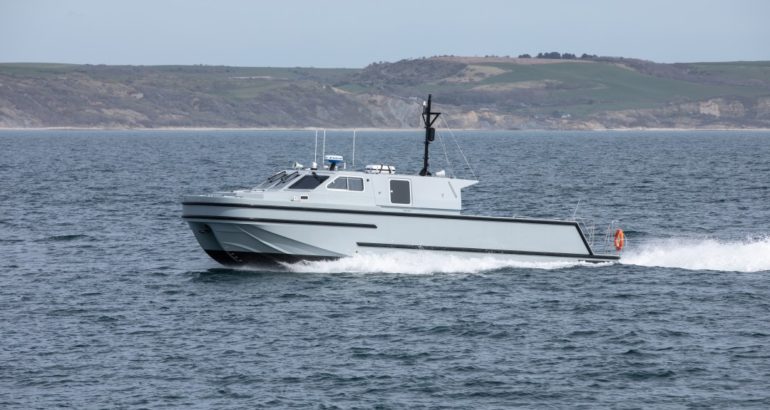 RNMB HEBE will ultimately be transferred to “Project Wilton” and will play a role in the Royal Navy’s (RN) Mine Countermeasures & Hydrographic Capability (MCH) team in achieving its goal “to deliver UK peacetime route survey capability by exploiting Maritime Autonomous Systems”.

In this programme, RNMB HEBE will be integrated with several specialised payloads such as sonars and Autonomous Underwater Vehicles (AUVs) that can be remotely launched and recovered. The increased capacity of the 15m workboat allows RNMB HEBE to function as a floating Command and Control Centre from which to operate an 11m Autonomous Surface Vessel (ASV) RNMB HARRIER which AEUK is also delivering as part of its involvement in Project Wilton.

With a reputation for innovation, AEUK has designed the SEA Class boats to be easily reconfigured, providing the flexibility to change the role of the craft to perform a variety of tasks with limited effort. The remainder of the 15m SEA Class project will deliver a wide range of versatile workboats to include Officer Training, Dive Training/Support and Survey Work boats between now and 2024. The Officer Training boats are the next variant of this modular boat capability to be built and are currently under production at AEUK’s Horizon production facility.