You are at :Home»News»HMS Queen Elizabeth welcomes UK and US jets for major exercise 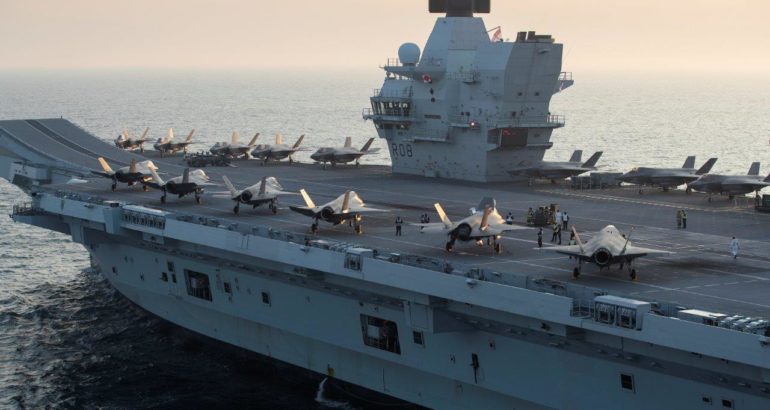 HMS Queen Elizabeth has embarked the largest number of warplanes ever onto her deck as she prepares to take her place at the heart of a UK-led NATO Carrier Strike Group.

Two squadrons of F-35B stealth jets, the RAF’s 617 Squadron (The Dambusters) and the US Marines Corps VMFA-211 (The Wake Island Avengers), have joined the 65,000-tonne carrier as she sails for exercises with allies in the North Sea.

With a total of 14 jets and eight Merlin helicopters, it’s the largest concentration of fighter jets to operate at sea from a Royal Navy carrier since HMS Hermes in 1983, and the largest air group of fifth generation fighters at sea anywhere in the world.

In this month’s group exercise, HMS Queen Elizabeth will be joined by seven Royal Navy destroyers, frigates and auxiliaries, plus other supporting units, to form a fully sovereign Carrier Strike Group, ready to fight on the surface and in the air.

The Carrier Strike Group will be put through its paces off the north east coast of Scotland as part of Joint Warrior, NATO’s largest annual exercise.

“The United Kingdom’s maritime renaissance has been unfolding over many years, as we introduced a new generation of ships, submarines and aircraft into service. But this marks the first time we have brought them together in a cohesive, potent, fighting force. HMS Queen Elizabeth will be operating with the largest air group of fifth generation fighters assembled anywhere in the world. Led by the Royal Navy, and backed by our closest allies, this new Carrier Strike Group puts real muscle back into NATO and sends a clear signal that the United Kingdom takes its global role seriously.”

“This is an incredibly exciting time for 617 Squadron as we begin a new era of partnership with the US Marine Corps building towards next year’s operational deployment with HMS Queen Elizabeth. You need to go back more than three decades to find the UK operating anything on this scale or complexity and this is a first for fifth-generation carrier capability. The era of big-deck, fast jet carrier operations is back”.

Usually based in Marine Corps Air Station (MCAS) Yuma, in Arizona, VMFA-211 arrived in the UK just under two weeks ago. Landing at the home of the Lightning Force, RAF Marham after the trans-Atlantic flight, they worked up with 617 Squadron conducting the RAF led Exercise Point Blank before embarking in the carrier.

Their Commanding Officer, Lieutenant Colonel Joseph Freshour USMC, said: “The Wake Island Avengers are ready in all respects to work with the British sailors and aircrew on board HMS Queen Elizabeth. We are looking forward to deploying alongside our British counterparts over the next few months, and we will work tirelessly as a part of this transatlantic naval force. We are proud to play such an important role in the generation of an allies’ carrier strike capability.”

Captain James Blackmore, the UK’s Carrier Air Wing Commander, added: “We are going to learn a huge amount from operating F-35Bs at sea with the USMC, they have had them longer and we can share ideas and practices. But this is much more than that; this is the trans-Atlantic alliance in action, demonstrating that two close allies can not only fly from each other’s carriers, but can fight alongside each other should we need to. This level of integration offers a decisive flexibility in times of crisis, conflict or war.”

HMS Queen Elizabeth, along with her 1,680 sailors, aviators and marines, is due to return to her home port of Portsmouth next month.