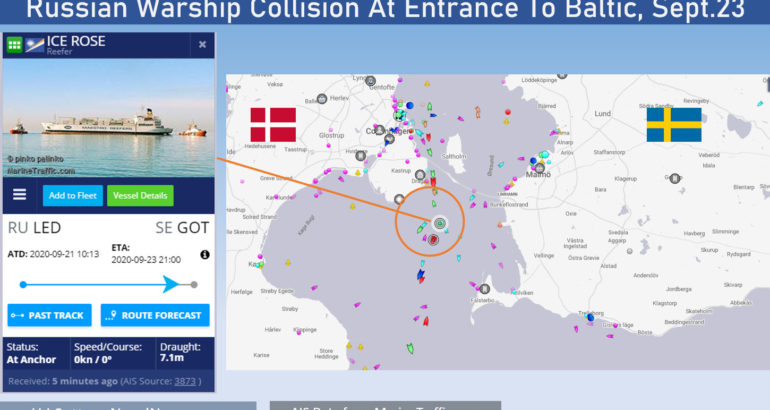 AIS data shows the Ice Rose anchored south of the bridge. The Russian Warship does not appear to be on AIS.

A Russian Navy frigate has collided with a merchant ship in the entrance to the Baltic this morning. The accident happened in thick fog. Details are still emerging.

The collision has been confirmed by the Danish Ministry of Defense.

According to reports (in Danish) the Russian warship is believed to be the 311 Kazanets, a Project 1331M Parchim Class light frigate. The ship, which has yet to be formally identified, does not appear to have been transmitting on AIS (Automated Information system). AIS is designed to help avoid collisions.

The naval ship struck the Ice Rose (IMO: 8311106), a 12,401 ton (gross) reefer carrying refrigerated containers. The merchant ship is now at anchor south of the Øresund Bridge which spans the entrance to the Baltic. The bridge connects Denmark and Sweden.

According to data from MarineTraffic several law enforcement, pilot and rescue vessels are in attendance. These include the Danish Navy’s Diana-class patrol vessel HDMS Najaden (P523), and the Swedish rescue vessel Elsa Johansson.

Since publishing this article, the Russian Navy warship has been confirmed as 311 Kazanets. The warship, together with another Parchim Class corvette, can be seen in this Sentinel satellite image taken later in the day (identified by Frank Bottema)