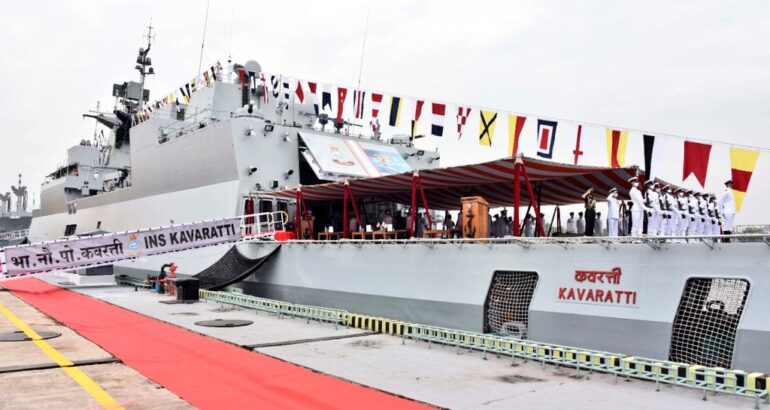 INS KAVARATTI (P31) all decked up during its commissioned into the Indian Navy. Indian Navy picture

Named after the capital of the Lakshadweep group of islands, INS Kavaratti has been constructed using high-grade DMR 249A steel produced in India. The vessel is 109 meters in length, 14 meters in breadth with a displacement of 3300 tonnes. Kamorta-class corvettes are specialized in ASW. The complete superstructure of the ship has been built using composite material. This feature combined with its “X shape” and slopped surfaces enhances the stealth features resulting in a reduced Radar Cross Section (RCS). According to an Indian Navy statement, the ship’s advanced stealth features make her less susceptible to detection by the enemy. The ship is propelled by four Diesel engines.

The ship has high localy content with the state of the art equipment & systems to fight in Nuclear, Biological and Chemical (NBC) warfare conditions. Also, the weapons and sensors suite onboard is pre-dominantly Indian and showcases the Nation’s evolving capability in this niche area. Some of the major equipment/ systems developed indigenously include the Combat Management System, Torpedo Tube Launchers and Infra-Red Signature Suppression System etc.

INS Kavaratti has a multitude of advanced automation systems such as Total Atmospheric Control System (TACS), Integrated Platform Management System (IPMS), Integrated Bridge System (IBS), Battle Damage Control System (BDCS) and Personnel Locator System (PLS) to provide a contemporary and process-oriented System of Systems for optimal functioning of the warship. Having completed sea trials of all her equipment, Kavaratti has been commissioned as a fully combat-ready platform providing a boost to the ASW capability of the Indian Navy.

The ship is manned by a team comprising twelve officers and 134 sailors with Commander Sandeep Singh at the helm as her first Commanding Officer. The ship would be an integral part of the Eastern Fleet under the Eastern Naval Command.

In terms of weapon systems, Kamorta-class corvettes are fitted with: