HMCS Harry DeWolf sailed under Royal Canadian Navy (RCN) command for the first time in early October 2020, and has since been at sea regularly, with the crew conducting training, testing and trials on the new vessel.

The work is part of a normal process to incrementally test Harry DeWolf and its systems, and as sailors gain experience with this first-of-class ship, they’re also making an immediate impact on RCN business, explains the ship’s commanding officer.

“Tests and trials can be a limiting description. The ship is in naval service, and it has been since July 31, 2020,” said Commander Corey Gleason, referencing the official date Harry DeWolf was delivered to the Department of National Defence this past summer. That delivery was followed by an initial alongside work period before heading to sea.

While trials will continue over the next 12 months, they will be taking place alongside naval operations, Cdr Gleason added. During the most recent proficiency sail to Newfoundland and Labrador, for example, the ship contributed to Canada’s maritime domain awareness while also gaining proficiency with the new platform.

“We’re providing sovereignty through presence in Canada’s domestic waterways. As we encountered aircraft and surface vessels, we identified them, tied their broadcasted information with their registry and compared our own recognized maritime domain picture with our maritime command component ashore,” he said, noting the ship is also ready to respond as a backup search and rescue asset locally.

Through the remainder of the fall and winter, Harry DeWolf will conduct both cold-weather and warm-weather trials as it continues building operational capability – the ship will work with Cyclone helicopters and PUMA unmanned aerial vehicles, trial its main 25 millimetre gun, and continue operating its small boats, among other tests. In the spring, the crew plans to conduct their first replenishment-at-sea, which will prove the ability to remain at sea for months at a time.

“Each new step only adds to the ship’s capabilities,” Cdr Gleason said.

Work will continue through the spring, building toward a commissioning ceremony for HMCS Harry DeWolf in the summer of 2021, and a subsequent deployment on Operation NANOOK, Canada’s premier annual northern operation.

Increasing the RCN’s capabilities in the North is one of the key features of the Harry DeWolf class, and HMCS Harry DeWolf and its sister ships will be at the core of an enhanced Canadian Arctic presence over the coming years. The thick-hulled ships can sail in up to 120 centimetres of first-year sea ice, and come with ample space for helicopters, small vehicles and cargo containers, which are particularly useful when operating in remote regions. The ships will also be available to support other government agencies like the Canadian Coast Guard.

“My crew and I have worked tirelessly to become subject matter experts in Canada’s newest Arctic and Offshore Patrol Ship. Each and every sailor in my crew has contributed in the development of procedures and policies required to safely operate HMCS Harry DeWolf. For all of us, putting our own procedures and policies to work is incredibly satisfying.”

In addition to Northern missions, the class will also operate offshore and internationally, complementing the capabilities of other current and future RCN warships – they will be capable of conducting anti-smuggling and piracy operations, contributing to international security and stability, and are also equipped to respond to humanitarian, emergency response and disaster relief situations, both at home and abroad.

With its list of impressive modern operational capabilities, HMCS Harry DeWolf and the rest of the class are designed to meet the needs of a modern Navy and benefit the well-being of sailors, with individual crew accommodations, gender-inclusive washrooms, and flexible common spaces that allow for quiet and privacy to observe various religious or cultural practices.

Cdr Gleason said he and his team were proud to take the ship to sea for the first time, and that pride only continues to build as they put the platform to work. 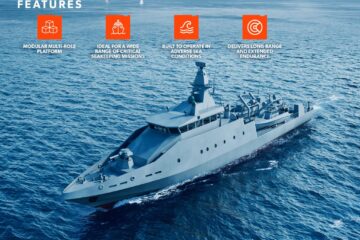