In the ever-shifting and tightening budgets of the United States Department of Defense, potential USMC budget cuts may mean that the development of the NMESIS, LBASM, LRPF or HiMARS Precision Strike Missile may be shelved, delayed, or canceled, impacting the Force Design 2030 strategy against peer nations...

Despite a push from a group of powerful House lawmakers, the final defense spending bill for fiscal year 2021 — released Dec. 21 — slashes the Marine Corps’ efforts to develop long-range precision fires capabilities.[…] the final spending bill contained no funding for Marine Corps Tomahawk procurement and had substantial cuts to the research and development effort for Ground-Based Anti-Ship Missiles (GBASM). The Marines had requested $125 million for Tomahawks and $64 million for GBASM as well as $75 million for long-range fires. The final bill essentially cuts the GBASM budget in half and trims almost $20 million for LRPF research and development — roughly a 25 percent cut.

According to The Center for Strategic and International Studies (CSIS), “The reported total Marine Corps request for FY 2021 is $46.0 billion, a nearly 5 percent decrease in real terms from last year’s enacted level of funding [from $47.4 billion in FY 2020]”.

In the ever-shifting and tightening budgets of the United States Department of Defense, these FY 2021 United States Marine Corps’ (U.S.M.C.) budget cuts may mean that the development of the NMESIS (two Naval Strike Missiles on an unmanned 4×4 JLTV, nicknamed “Rogue Fires”) and other Land Based Anti-Ship Missile (LBASM) Long Range Precision Fires (LRPF) plans and options such as the Ground Launched Small Diameter Bomb (GLSDB), or HiMARS Precision Strike Missile may be shelved, delayed, or canceled for the U.S.M.C.’s Force Design 2030 strategy against peer nations.

Currently, the U.S.M.C. is limited to the Lockheed Martin’s Multiple Launch Rocket System (MLRS) rockets with ranges of:

According to DefenseNews, several House Republicans filed protests against these Marine Corps LRPFs budget cuts and these protestive actions have yet to be determined on how they will affect the 2021 Defense budget.

The U.S. Army is currently testing two in-service U.S. Navy missiles (without any modifications) to incorporate into its ground-based LRPFs arsenal, and this testing and development could help remedy the $20 million (25-percent) cut in the Marine Corps’ FY 2021 LRPF Research and Development since the U.S.M.C. often purchases the same weapons systems that the U.S. Army fields.  However, the U.S. Army does possess trucks, trailers, and vehicles that are unique, longer, and heavier than what the U.S. Marines use so the crossover from the U.S. Army to the U.S. Marines’ usage might not be 100-percent compatible. 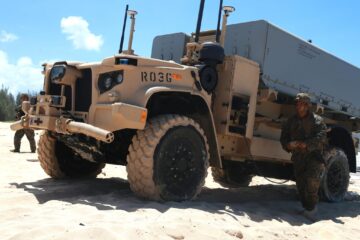 Naval News Staff 20 Sep 2021
The US Marine Corps’ top modernization priority is fulfilling the requirement for a ground-based anti-ship missile capability. The operational requirement for this ship-killing capability is a relatively new development stemming from the Commandant’s Planning Guidance and the Corps’ Force Design 2030 efforts.