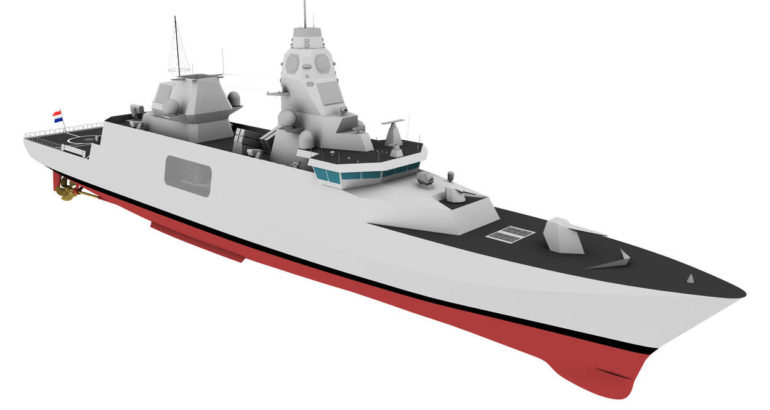 The Dutch and Belgian Ministries of Defense announced today that the M-frigate replacement will be called: Anti-Submarine Warfare Frigate (ASWF).

The ship class will consist of two ASWF for the Belgian Navy (Marinecomponent/Composante marine) and two ASWF for the Royal Netherlands Navy (Koninklijke Marine). The future frigates’ main task will be anti-submarine warfare (ASW). The frigates will be equipped to cope with future threat environments. So-called information warfare will play a prominent role in this. It will include of cyber warfare and intelligence.

The names of the four ships are not yet known. The future frigates will be replacing HNLMS Van Amstel and HNLMS Van Speijk in the RNLN and Leopold I and the Louise-Marie in the Belgian Navy.

The new ships will benefit from the latest technologies in the field of ASW, and a robust self-defense against overwater threats. There is also extensive automation to enable operations with a limited basic crew. Discussions on the specifications of the systems that Dutch shipbuilder Damen Schelde Naval Shipbuilding and Defense electronics company Thales will supply are in full swing.

In 2018, the A letter with the requirements statement went to the Dutch House of Representatives. The B letter on the study phase was delivered in 2020. Meanwhile, there is formal permission to proceed with the acquisition preparation (the D phase). The Netherlands, in close consultation with Belgium, is in charge of the replacement process. The Dutch Defence Materiel Organization (DMO) is realizing the acquisition with the Royal Netherlands Navy, Belgian Navy and Belgian Direction Générale Material Resources (DGMR). By 2030, the 4 ASW frigates should be delivered to both navies.