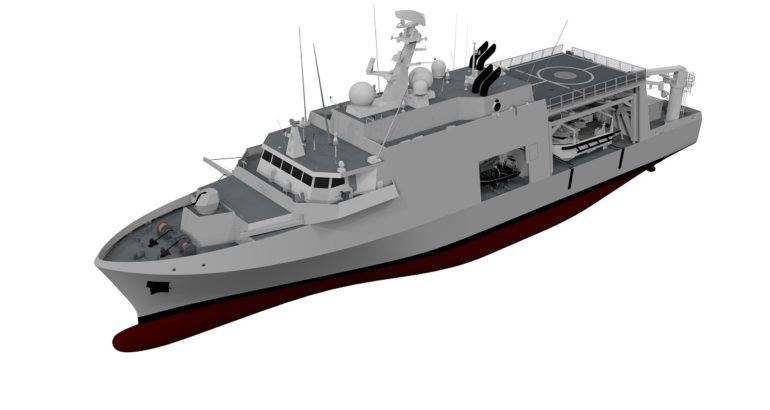 On 18 December 2020, the Belgium Naval & Robotics teams reached a new contract milestone, the programme is still on track. This programme will supply the Belgian and Dutch navies with twelve minehunters equipped with unmanned systems (toolboxes).

This milestone also marks the programme’s gradual transition towards the Kership teams. Naval Group is in charge of the preliminary design of the ships and works closely together with Kership. They will start on the detailed design of the ships as of February 2021, followed by their construction.

“Achieving the Preliminary Design Review confirms that the overall design meets all the client’s contractual requirements. Nearly 200 staff members, employed at the Naval Group sites in Lorient, Ollioules, Nantes-Indret, Angoulême-Ruelle and Paris, have been working hard for months to be able to come up with more than 80 deliverables by mid-November defining the ship and all its systems.”

The construction of the first ship will start in the summer of 2021 and the delivery is planned for 2024.

For the unmanned systems, the completion of this milestone was formalized by the delivery and acceptance of the documentation defining operational use concepts, functional and technical architectures as well as preliminary safety studies of each system (surface drone USV INSPECTOR 125, underwater drone AUV A18-M, towed sonar T18-M, inspection and neutralization drones SEASCAN MK2 and K-STER, aerial drone UAV, the sweep system and containers).

“In the midst of the health crisis, more than 100 ECA GROUP employees have contributed to the completion of this important milestone in 2020. We remain fully committed to our customer to reach the following milestones and to start the production of the prototypes in 2021,”

This milestone proves once again the resilience of the Naval Group and ECA GROUP teams. Despite the complex sanitary conditions imposed on the Belgian-Dutch programme just eighteen months after its launch, everything is well on schedule.

“Thanks to their diligence and expertise, Belgium Naval & Robotics managed to deliver all the documents of the Preliminary Design Review on time. The adjustments made by BNR as a result of our in-depth analysis, numerous comments and questions, have been swift and constructive. My binational project team and I are confident and look forward to the Critical Design Reviews.”,

The Belgian Ministry of Defense officially notified the consortium Belgian Naval & Robotics (formed by Naval Group & ECA Group) on May 22, 2019, a contract to supply 12 motherships and associated equipment to the Belgian and Dutch Navies.

According to Commander Bultot, rMCM Project Leader, the first steel cut of the first-in-class ship is set to take place at the Kership (Piriou) shipyard in Concarneau, France, on 21 June 2021.

Designed by Naval Group, the MCM mothership has one port and one starboard LARS located slightly aft of midship, close to the ship’s centre of gravity. Each LARS consists of a pivoting A-Frame davit with the USV, weighing up to 18t, housed in a floating cradle. It allows the simultaneous launch of two USVs with maximal safety. For the Belgian-Dutch mine countermeasure (MCM) program, conducted by Belgium Naval Robotics – a Naval Group and ECA Group consortium -, they will be used to operate two ECA’s Inspector 125 USV.

The mothership itself is 82 meters long with a displacement of 2,500 tons and a crew complement of 30 sailors (total accommodation for 63 people). It is fitted with a Bofors 40Mk4 40m main gun system, FN Herstal’ Sea deFNder 12.7mm remote weapon stations, an NS50 radar by Thales, Sea Eagle EO/IR by Chess Dynamics, Saab TactiCall Communication System, and a platform for SKELDAR V-200 VTOL UAV.