The Turkish Navy kicked off a large-scale naval exercise named Blue Homeland-2021 (in Turkish Mavi Vatan-2021) in the Aegean Sea and Eastern Mediterranean on 25th February.

The Blue Homeland is not only an exercise name; it is also a geopolitical concept that manifests Turkey’s geopolitical agenda in the forthcoming years. This year second iteration of the exercise will be conducted. The first of the Blue Homeland exercise series was held in 2019, which was the largest naval exercise in Turkish naval history. All of the naval assets were participated in the training by deploying three surrounding seas (Black Sea, Aegean Sea, East Mediterranean). Turkey planned the second iteration of the exercise for 2020, but it was canceled due to the COVID-19 outbreak conditions.

The objectives of the exercise are:

The exercise will be conducted in two phases. First, the harbor period of the training at the Aksaz, Izmir and Golcuk Naval Bases. During the harbor phase, computer-based exercise activities are being executed. The participants will also conduct coordination meetings concerning sea activities, simulated training, and workshops. After the harbor activities are completed, the sea phase will follow. According to the Turkish Ministry of Defence’s promulgation, unmanned aerial vehicles will be used at an operative and tactical level in the naval operations area. Surface and air defense firings will be performed, and high-speed unmanned vehicles will be used as targets to provide a real operational environment.

Turkish Navy is actively operating unmanned systems both in exercises and real operations. Last week Turkish Aerospace Industries delivered two more ANKA Unmanned Combat Aerial Vehicle to the Turkish Navy. The ANKA UCAV can be deployed in the surrounding seas with its SAR and camera load for surface reconnaissance and surveillance missions. It can engage the assets that have weak air defense capabilities. In this exercise, the Turkish Navy will test the effectiveness of ANKA and TB-2 unmanned aerial vehicles against sea targets within the scope of surface warfare and their use in coordination with manned units.

Besides, unmanned systems will be used as targets in live firing exercises. During GUNEX against surface targets, the participating warships will engage to ASELSAN’s ALBATROS-T high-speed unmanned surface target boat, which is specially developed as a moving target to simulate various tactical maneuvers and rapid asymmetric threats remotely. In accordance with the gunfire training objectives, ALBATROS-T can perform different tactical scenarios such as zig-zag and straight-on high-speed attacks.

Turkish Aerospace Industries’ target drone named Simsek will simulate enemy aircraft during the anti-air warfare firing exercise. Simsek is a high-speed Target Drone System that can fly with a maximum of 400 knots speed between 10.000-15.000 feet altitudes. It is launched with a catapult and capable of flying for 45 minutes. The Blue Homeland is considered one of the most significant drills to see the Turkish Navy’s warfighting capabilities. It offers an excellent opportunity to monitor the Turkish Navy’s improving outlook, as well as its joint operations capacity with other forces. Though there are conflicts in the region between Turkey and Greece, Turkish officials emphasize that these exercises prove the Turkish Naval Forces’ contribution to peace, stability, and security, not an element of threat to anyone. 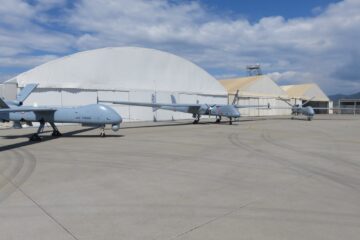 Tayfun Ozberk 28 Mar 2022
Turkish Defence Ministry released photos from the delivery ceremony, which was conducted in the Turkish ...