Home» News»Danish frigate to join anti-piracy operation in Gulf of Guinea
Besides the Gulf of Guinea, Denmark last year deployed the frigate Iver Huitfeldt in the Strait of Hormuz as part of the Operation Agenor (Danish MoD picture)

Danish frigate to join anti-piracy operation in Gulf of Guinea

In the fall of 2021 Denmark will deploy a frigate to the Gulf of Guinea off the western coast of Africa where it is going to contribute to the international operation against the pirates. Today the proposal was discussed in the Foreign Affairs Committee.

“Denmark deploys a frigate to the Gulf of Guinea. This is initiated because the maritime security is challenged. Pirates are behind several severe kidnappings in the area. It threatens the security of Danish and foreign crews. In such a situation we cannot and shall not just watch. We must stand up for the right to free navigation. The Danish Navy has previously proved strong and important in the combating of the pirates. However, if we are really going to get the security under control in the Gulf of Guinea an international military presence is necessary. From the Danish side we try to have more countries taking a responsibility,” the Danish Minister of Defence, Trine Bramsen, stated.

The frigate is equipped with a SEAHAWK helicopter and it will be able to deploy special operation forces from the frigate’s naval task force, if necessary. The task force is among other things trained for carrying out rescue operations on hijacked ships.

“The Danish flag waving is a reliable sign of security and safety at sea. Due to the fact that Denmark undertakes the responsibility as a marine nation when the safety and the right to free navigation are threatened. And now we apply sharp measures against the pirates in the Gulf of Guinea both in terms of diplomatic and military contributions. We have also increased our stabilization efforts in the area co-operating with relevant coastal states. It is a matter of contributing to making the countries more able themselves to handle the safety so that we fight the pirate attacks as well as the causes for the pirate actions,” said the Minister of Foreign Affairs, Jeppe Kofod.

As the world’s fifth largest marine nation Denmark has a special interest in protecting the civil shipping and the right to free navigation. On average, 30-40 Danish operated ships sail through the Gulf of Guinea daily and they transport goods at a value of almost 10 billion DKK (US$1.6 billion) a year. This being one of the reasons why, in January, the Government appointed a special representative for maritime security, Ambassador Jens-Otto Horslund.

Prior to the deploying, the Danish Government is going to motion for a resolution in the Danish Parliament.

For the record, the Gulf of Guinea became a “maritime defense of interest” for the EU in January, with the Council launching the first pilot case of the Coordinated Maritime Presences (CMP) concept. 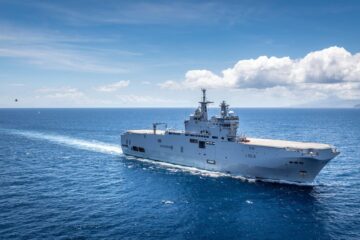 Naval News Staff 13 Oct 2022
The multinational maritime exercise Grand African NEMO 2022 began Oct. 11 in a wide area stretching from Senegal to Angola. The exercise, involving 17 of the 19 countries bordering the Gulf of Guinea and 8 partner nations, is scheduled to last until Oct. 16, 2022.

Naval News Staff 19 Aug 2022
The Danish Ministry of Defense (MoD) announced on 18 August a plan to invest up to 40 billion DKK ($5.5 billion USD) to strengthen the Royal Danish Navy (Søværnet).