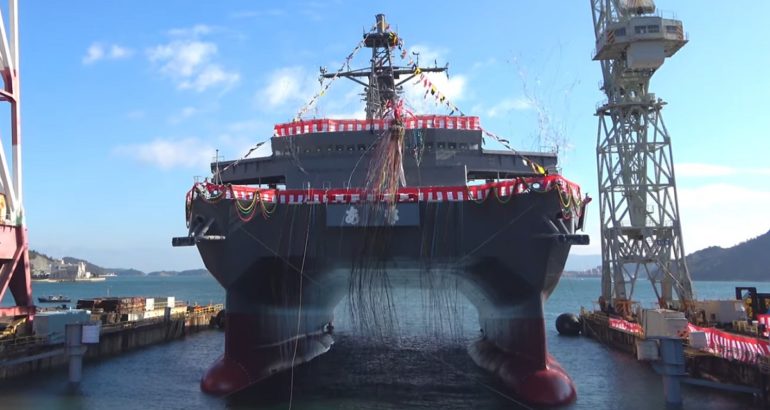 A new ocean surveillance ship, JS Aki (AOS-5203), was commissioned by the Japan Maritime Self Defense Force (JMSDF) on March 4, 2020.

Yoshihiro Inaba contributed to this story

Aki is the third vessel of the Hibiki-class of Ocean Surveillance Ships. Their mission is to gather undersea acoustic data emitted by foreign submarines. Therefore, Aki is equipped with a surveillance towed-array sensor system (SURTASS), which is a very long range active / passive sonar that can be deployed into the sea to collect various acoustic data.

The hull structure of Aki is a very characteristic one called Small Waterplane Area Twin Hull (SWATH). This structure reduces the wave resistance by reducing the volume of the ship near the sea surface and increases the stability during navigation.

Aki is required to operate at a low speed during surveillance activities using the SURTASS, but this special structure allows it to remain stable while underway even in bad weather and sea states.

Interestingly, Aki is the first new Hibiki-class ship built in about 30 years. The Hibiki-class was originally planned for construction during the Cold War to collect data on Soviet submarines. However, Hibiki, the first ship, and Harima, the second ship of the class, entered service in 1991 and 1992 when the Cold War had already ended. As a consequence there were no plans to build additional ships of this class for a while.

However, JMSDF’s decision to build Aki is due to the fact that the People’s Liberation Army Navy (PLAN) submarine capabilities are increasing. According to the U.S. Department of Defense’s annual report to Congress on China in 2019, it is estimated that by 2020, China will have 65 to 70 submarines.

Aki is expected to collect acoustic data on such Chinese submarines and greatly improve the anti-submarine warfare (ASW) capabilities of Japan and the United States. In addition, JMSDF is promoting a system in which crews can be completely replaced during berthing, like the US Navy’s LCS dual crew concept (or French Navy dual crew for FREMM frigates), so that the Hibiki-class can be operated continuously over a long period of time.