Home» News»Mysterious Ship In Iranian Shipyard Is Likely IRGC’s New Flagship
Click to Enlarge. This satellite image from Planet Labs Inc. shows the unidentified vessel at the Shahid Mahallati Shipyard, Bushehr, Iran. Note that the rear half of the ship is in the shed.

We believe that Iran's IRGC (Islamic Revolutionary Guard) will unveil a new ship soon. The 64m (210 ft) long catamaran is believed to be a low-observable missile corvette. It is much larger and heavier armed than the IRIS Shahid Nazeri, a related ship already in IRGC service.

The Islamic Revolutionary Guard Corps’ (IRGC) ship IRIS Shahid Nazeri is unique across navies. It’s distinctive lines, being a large catamaran with an unusual superstructure, mark it out as one of the most recognizable warships afloat. New intelligence suggests that it is soon to be joined by another. And this one will be bigger, and much better armed. The new design could be described as a low-observable (‘stealth’) missile corvette.

Nothing has been revealed officially about the new ship. Thanks to high-resolution commercial satellite imagery we have been able to keep an eye on it however.

The new vessel is being built at the Shahid Mahallati Shipyard in Bushehr, Iran. This is the same yard that built the IRIS Shahid Nazeri, which fits as the two vessels have some similarities. both are large catamarans with narrow widely-spaced hulls. The superstructure sits above the two, mounted on several tall legs, almost like a pond skater. This ungainly appearance may all the same allow a shallow draft yet high superstructure and decent stability. It also conveys relatively high speeds, reportedly 28 knots for the IRIS Shahid Nazeri.

The widely spaced hulls also allows small boats to be driven under the ship, which may be useful in some tactical scenarios. One possibility is that the ships can act as command ships for Iran’s swarms of small boats. The relatively spacious interior, high vantage point and helipad all match this interpretation. However it is also equipped with missile bins for anti-ship missiles.

We can infer from the family connection to IRIS Shahid Nazeri that the new ship is also constructed from aluminum. It is significantly larger however, not just in overall dimensions but in volume. The superstructure extends much further aft than on the earlier boat. Although currently unconfirmed, we expect it to feature a helipad.

Gun armament is likely to be similar again with only cannons for self-defense. IRIS Shahid Nazeri has a Gatling gun (possibly a locally produced copy of a minigun) up front and two ubiquitous Dshk 12.7mm heavy machine guns. There does not appear to be space for a larger cannon on the new ship either.

Missile bins are being built behind the bridge, angled to fire outwards. These are likely for anti-ship cruise missiles. The new ship would be in some respects analogous to the Chinese Type-022 and Taiwanese Tuo Chiang class fast attack craft.

There is insufficient information at this stage to say which class this will be in the IRGC line up. It may relate to a project called the Shahid Soleimani class. This is named after the Major General Qasem Soleimani who died in a US drone strike in Iraq on January 3 2020. Another possibility is that it will be the Shahid Abu Mahdi class.

So we are waiting for the new ship to be revealed to the public. Perhaps then we will get additional information and can start to fit it in to the IRGC’s ever-expanding naval line up. A second hull, likely of the same design, has been observed at another small shipyard further down the coast near Bandar Abbas. This suggests that whatever it is, we may be see serial production. 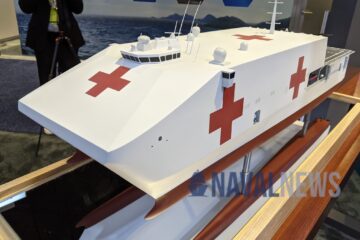 Martin Manaranche 17 Aug 2021
At the Sea Air Space show which took place earlier this month, Austal was for the first time showcasing a scale model of its expeditionary medical ship (EMS).