The two equipped vessels, ORP Albatros and ORP Mewa, are being built at the Remontowa Shipbuilding S.A. shipyard in Gdańsk, which belongs to Remontowa Holding Group. Installed in conjunction with an OSI Maritime Systems integrated navigation bridge system, the radar will be tasked with navigation and surface surveillance functionality, providing the Polish Navy with solid state radar sensors to ensure safety of navigation whilst providing advanced small target search capability. This capability contributes to ship safety of navigation and enhances the performance in the operational tasks.

Adrian Pilbeam, Head of Sales Maritime Surveillance commented: “HENSOLDT UK are pleased to supply the Polish Navy with their first SharpEye radars to assist in the demanding operational tasks of a minehunter. This further extends a longstanding relationship for the supply of radar sensors to OSI Maritime Systems for integration into their bridge systems.”

Xavier Vavasseur 22 Sep 2021
Day 2 at DSEI 2021 in London, UK. We focused on Naval Strike Missile (NSM) with Raytheon, the new Quadome 3D radar by Hensoldt, UAS integration with Thales and the MMCM program with Thales. 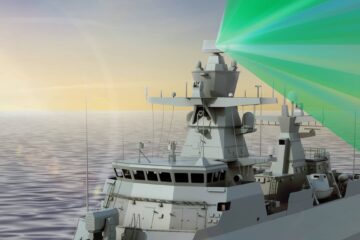