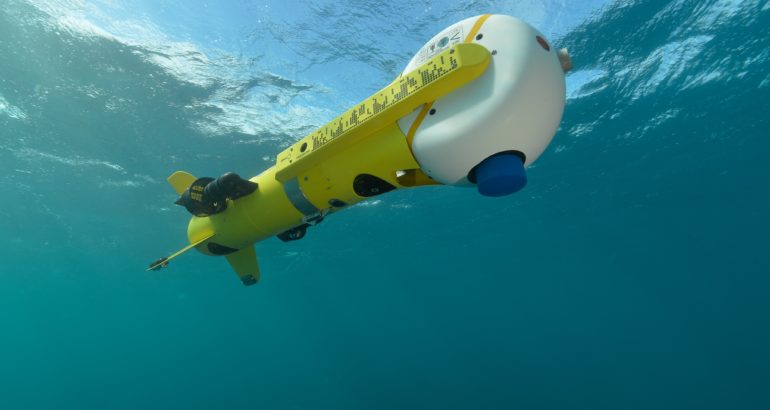 Australian company Total Marine Technology (TMT) and the French company ECA GROUP have signed a Memorandum of Understanding (MoU) to combine their expertise in the domain of unmanned technologies in order to partner for the SEA 1905 Phase 1 - Tranche 1 Program of the Royal Australian Navy (RAN) for their future Maritime Mine Countermeasures and Military Survey Capability.

Both companies are highly skilled in robotics equipment for harsh maritime environments and have been serving customers in the Defence and Security domain for many years. Today, ECA GROUP and TMT announce their partnership and a common commitment to supply the Commonwealth of Australia with the most competitive and technologically advanced solution for SEA 1905. TMT and ECA GROUP are already in discussions with other possible Australian partners to further enhance their offer.

The Royal Australian Navy’s SEA 1905 Maritime Mine Countermeasures (MCM) Program was announced in April 2019 to replace the RAN’s four remaining Huon-class Minehunter Coastal (MHC) ships. In January 2021, Australia’s Minister for Defence also stated that the new ships would be based on the Arafura-class offshore patrol vessel. The vessels will deploy modular unmanned autonomous systems that will provide them with mine-hunting and military survey capabilities. The request for tender SEA 1905 Phase 1 – Tranche 1 is expected for the fourth quarter of 2021. According to Admiral Michael Noonan for Australiandefence.com.au, the program schedule of SEA 1905 Phase 1 is well on the track: “first pass approval has occurred, second pass approval will be in the third or fourth quarter 2022 with the introduction of capability in 2023/2024 and IOC (initial operational capability) in the backend of 2024”. Admiral Noonan also shared a figure of A$3.3 –A$5 billion (€2.1 – €3.2 billion) for the future mine warfare and hydrographic vessels.

ECA GROUP has over 50 years’ experience in the design, manufacturing and support of complete and integrated unmanned systems based on autonomous and remotely operated technologies for mine clearance at sea, while constantly keeping crews and the ship out of the danger zone. UMIS – ECA GROUP’s integrated drone systems for Mine Detection, Classification, Identification and Neutralization benefit from its many years of experience in engineering and solutions development offering compact, interoperable, modular and scalable systems. They can be operated from dedicated mine hunters as an integrated solution, but also from a ship of opportunity or from the shore as an air/road transportable configuration. This solution being comprehensive, as well as sea proven, ECA GROUP has a unique offer on the market of maritime unmanned technologies.

In addition, ECA GROUP also offers deep and ultra-deep unmanned underwater vehicles down to 6000m for hydrography and oceanography.

ECA GROUP systems support over 30 navies including the Royal Australian Navy. In the past, ECA GROUP provided and supported the RAN with its mine disposal PAP robots which were in operation on the Bay Class minehunters until 2001. In the late 90’s, ECA GROUP delivered and installed onboard the RAN Leeuwinn class ship an integrated platform management system OPSYS which was upgraded in 2010. Currently, ECA GROUP is participating in the SEA1778 project by supplying and integrating two “remote control kits” on two boats to transform them into Unmanned Surface Vehicles (USV) to tow the AMASS (Australian Minesweeping and Support System) influence sweep. In addition, in 2008/2009 ECA GROUP also delivered the software suite (now integrated in UMISOFT software suite) to the Australian Hydrographic Service, for acquiring and processing the hydrographic data collected by the four Paluma-class motor launch vessels.

Total Marine Technology was founded in Australia and now has over 20 years’ experience in building and operating remote intervention systems in harsh subsea environments, Total Marine Technology has cultivated skilled personnel and robust technologies to operate in ocean depths exceeding 6000 metre sea water. It is currently the largest provider of ROV and intervention tooling in Australia and has a significant presence in South East Asia, Brazil, and other parts of the world.

TMT grew from a vision that challenged the international conventions regarding ROV technology. Previously the centres of excellence had been Europe and America. The founders of TMT believed a world-class ROV design, manufacture, and operations facility could be established in Perth, Western Australia, and be successful. It holds a number of patents and continues to be active in R&D to further push the boundaries of possibility in remote technology for harsh and dangerous environments.

” We are extremely happy to team with TMT, to strengthen our position in the southern hemisphere and specifically Australia, and to contribute to a sustainable Australian SEA 1905 Tranche 1 program. Our aim is to share and implement our expertise together with TMT in order to provide the Royal Australian Navy with sea proven, state of the art technologies tailored to their operational needs and to adapt the system over time to take into account the evolving threat as well as new technologies as they become available.”

“We believe the linking with ECA Group is a significant event which will unlock opportunities in the defence sector, through the provision of focussed and well implemented new technologies. The strengths of both companies are well suited to providing an integrated solution to address the rapidly developing area of undersea capability. To work collaboratively with the ECA GROUP is a real win for TMT. Their world leading technology in this sector will further enhance our ability to generate new skills and jobs as we seek to strengthen and diversify our core capability for future growth.“