Iranian Replenishment Vessel ‘Kharg’ Sinks in the Gulf of Oman

A fire erupted aboard Iranian Navy supply tanker IRIS KHARG in the night between June 1st and 2nd, off Jask Port, in the Gulf of Oman.

The crew were joined by military and civilian forces from other nearby vessels to try to put the fire out but after 20 hours of efforts, saving this vessel has been unsuccessful. The replenishment vessel sank off the Jask Port in the Gulf of Oman.

The fire, which according to the navy official started at the vessel’s engine room, gradually spread out of control and engulfed the ship causing it to sink. Here is footage of the blaze shared on Twitter by the local media Fars News Agency:

The cause of the incident is still unknown. The navy spokesman said the cause of the fire was still under investigation, and a statement will soon be made in this regard.

The 400 members crew onboard have been rescued and no casualties were reported yet.

The Islamic Republic of Iran Navy supply ship ‘Kharg’ was a modified Royal Auxiliary Fleet OI-class replenishment oiler launched in 1977 and commissioned with the Iranian Navy in 1984.

Until the commissioning of the forward base ship Makran, Kharg was the largest vessel in service in the Iranian fleet. It was used for both logistical and training purposes. 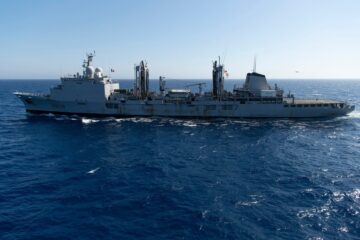 Naval News Staff 01 Jun 2021
The Project 03182 small seagoing tanker Vice Admiral Paromov has entered service with the Black Sea Fleet at the fleet’s main base in Sevastopol in the Crimea, the Defense Ministry’s press office said.