Benchmarking SGE-30 Goalkeeper produced by Signaal (now known as Thales Netherland) the ROKN requested to develop Korean close-in weapon system, since the U.S.-made Phalanx from Raytheon, which was introduced to the Korean Navy after the Dutch SGE-30 Goalkeeper was discontinued, had a difficulty defending ships from supersonic anti-ship missiles, and required high maintenance and had acquisition costs despite of its proved reliability. Accordingly, the two representative local companies, Hanwha Defense and LIG Nex1, have been competing each other to win the heart of the ROKN and to alternate Phalanx currently used by ROKN ships.

Before beginning his briefing on the CIWS-II, the Chief Manager of LIG Nex1, Kwan-soo Kim, first told Naval News at 2021 MADEX on June 10th that his company is proud to publicly announce the success of localizing numerous key naval technologies for the ROKN and the Marine Corps over years, which has always been believed to be the most difficult achievement in defense industry.

According to Kim, CIWS-II enables vessels to defend themselves actively by rapid multiple engagement with support from two radars installed on the weapon system, respectively for surveillance and tracking. One of them is Korean-made AESA (Active Electronically Scanned Array) radar that will function as a means of detecting inbound hostile targets in farther distance. It is expected to help ordnance crews counteract more rapidly. The presence of these radars in one platform ensures ships to cover 360-degree of scanning range, which would track an aerial target until it is intercepted, once its information is sent to the system and then specified. He was confident that the system’s radars gives crews the capability to find, track, and destroy targets in real time, unlike previous outdated radars that perceive aerial targets by turning to spread waves.

Closely akin to the current Phalanx, the close-in weapon system-II is armed with a 30mm GAU-8 gatling gun (arguably more destructive than 20mm Phalanx), but the Chief Manager put an emphasis on the fact that it is only a conceptual design, implying the possibility of considering different design options and functions in the future. Regardless of any potential changes, LIG Nex1 argued that its CIWS-II would maintain the tactical superiority as a more precise and sophisticated ship defense platform. The previous goalkeeper was manually manipulated, but the CIWS-II would flexibly support automatic, manual, and semi-automatic manipulation. If installed on land, the defense system would be able to handle strong point defense, particularly near runways and command facilities

The Defense Acquisition Administration (DAPA) decided in the Defense Business Committee on March 31st to develop CIWS in South Korea. 4500 billion KRW will be invested and then developed by 2030, the Korean news media reported. The localized CIWS is scheduled to be installed on newly deployed naval ships such as KDDX, FFX-III, and CVX, followed by the gradual replacement of tens of old CIWS on other ships.

Juho Lee 11 Jun 2021
Hanwha Systems unveiled its design for the Republic of Korea Navy (ROKN)’s new CWIS-II program at MADEX 2021. It claims that the new design will provide a marked improvement over past systems. 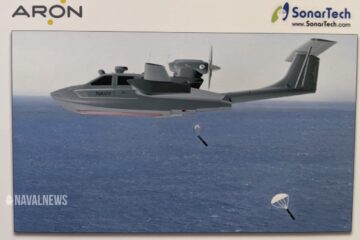 Juho Lee 11 Jun 2021
Aron and Sonartech have teamed up to produce an anti-submarine warfare variant of the Aron M80. In an interview with Naval News, Vice-president of Aron, Young-yun Jun, explained the capabilities of this new aircraft.