Egypt Inaugurates A New Naval Base Near The Libyan Border

Egypt inaugurated its newest naval base close to the Libyan border on July 3. The new naval base, “3rd of July Base”, is located in Gargoub on Egypt’s northwest coast, around 255 kilometers (160 miles) west of the Alexandria port.

El-Sisi released a document to endorse the opening of the new base that announces the official confirmation of the President.

“As part of our responsibility to strengthen the comprehensive power of the State and to maximize the Egyptian capabilities in all fields and sectors, foremost of which is the armed forces whose role is to protect the State’s wealth, in continuation of the process of supporting the pillars of the Egyptian national security on all strategic directions,” said Egypt’s President in the opening document.

He also underlined that the base aims to preserve the country’s economic wealth, secure shipping lines, and maintain maritime security by using naval surface units, submarines, and aircraft.

The new base takes its name from July 3, the day al-Sissi took over the control of Egypt. It is spread over more than 10 million square meters. The 3rd of July Base includes 74 facilities and numerous combat units, an operations center, a joint exercise center, seven training fields, and a military quay at a length of 1000 meters and a depth of 14 meters, which can host commercial ships.

A brief evaluation of the base’s position:

The position of the 3rd of July base is strategic because it is located at the entrance of the Eastern Mediterranean Sea and very close to the Libyan border. The purpose of the new naval base, which is only 150 miles from the port of Alexandria, seems to be more aimed at Libya. Because the base’s location provides quick response capability to the Egyptian Navy to the Libyan civil war when needed.

Egypt considers the developments in Libya as a national security issue. So, this base shows Egypt’s intention to intervene in the incidents in Libya from the sea in a short time

On the other hand, the geography of the base’s location does not provide natural protection to the ships and other military units stationed on the base due to the flatness of Egypt’s Eastern Mediterranean. The absence of natural protection, an essential issue in selecting the position of the bases, will cause Egypt to embark more defense systems to protect its assets from air, surface, and subsurface attacks.

Egyptian Navy’s annual large-scale exercise, Qader-2021, was concluded with Distinguished Observer Day activities in conjunction with the inauguration of the new base. The exercise included land, naval, and air drills under a scenario. The participating units carried out activities to secure Egypt’s Mediterranean coast against an adversary naval force in coordination with the other military branches. 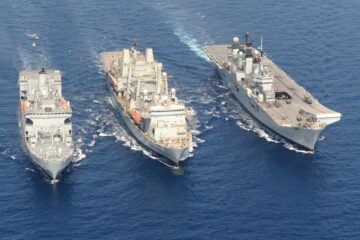 Xavier Vavasseur 29 Oct 2021
In a landmark deal, the UK has sold military vessels to Egypt for the first time in more than 30 years. The Royal Fleet Auxiliary ships, Fort Austin and Fort Rosalie, were sold by the Defence Equipment Sales Authority (DESA). 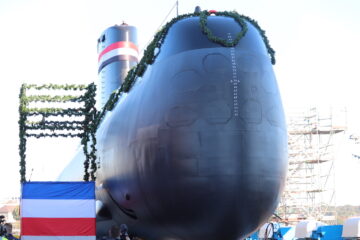 Nathan Gain 20 Apr 2021
The second Italian-built Bergamini-class FREMM frigate procured by Egypt arrived on April 15 at the Alexandria naval base, where she officially joined the Egyptian Navy.