Home» News»German Navy To Deploy A Frigate In Indo-Pacific Region For The First Time Since 2016
The "Bayern" was in the Indian Ocean for the last time in 2016. German Navy picture.

With the deployment of a frigate in Indo-Pacific region, the German Navy wants to send a signal for free sea routes and the observance of international law in the region.

The ship will be underway for a good six months. It will sail through the Mediterranean Sea and the Suez Canal via the Indian Ocean to Australia and East Asia. On the way, exercises are planned with the navies of Australia, Singapore, Japan and the United States of America. In addition, there will be formal visits, port visits at the highest diplomatic level.

By sending the “Bayern” to the South China Sea, the German government is underscoring its guidelines on the Indo-Pacific published last year. The region is of great strategic importance.

“Stronger defense and security cooperation fills the multilateralism that is so important to us with life and strengthens the partnership with friends in Australia, Japan, South Korea and Singapore.”

“Our prosperity is generated globally. What happens in Asia has direct consequences for us. I am pleased that we are flying the flag with our ship at sea.”

“More than 90 percent of the world’s foreign trade is conducted by sea, much of it via the Indian and Pacific Oceans,” the guidelines state. These maritime trade routes, and with them the supply chains, must be kept free and secure.

The voyage of the frigate “Bayern” to the Indo-Pacific sends a signal that Germany is becoming more involved in the geopolitically central region of the 21st century. Together with its value partners, the Federal Republic stands up for the preservation and defense of a rule-based international order.

“The world’s oceans belong to all of us,” says Admiral Kay-Achim Schönbach, Chief of Naval Operations. Against the backdrop of territorial disputes in the Indo-Pacific, he said, it is important to stand by our value partners. Since Germany is committed to global prosperity and human and international rights, it cannot duck out of the way.

At the same time, however, the Federal Republic does not want to behave confrontationally in the South China Sea, he said. “We will use the usual trade routes, where everyone can sail,” the admiral explained.

Until the end of February 2022, the frigate “Bayern” will be underway with more than 230 crew members on board. She will leave her home port of Wilhelmshaven on August 2. Among other things, she will support NATO’s Operation Sea Guardian in the Mediterranean and the EU’s Atalanta anti-piracy mission in the Horn of Africa during her voyage, as well as taking part in monitoring the United Nations sanctions against North Korea.

Highlights include joint exercises with friendly naval forces and naval diplomacy in the form of formal port visits. This is also intended to further deepen strategic partnerships, for example with Australia, Japan and South Korea.

Brandenburg-class or also known as F123-class is a class of four frigates mainly use for anti-submarine warfare (ASW) even tough they can perform surface-to-surface and anti-aircraft warfare (AAW). The ships named as follow: Brandenburg (F215), Schlewsig-Holstein (F216), bayern (F217) and Mecklenburg-Verpommern (F218). Those were commissioned between 1994 and 1996.

Richard Scott 14 Sep 2021
The long-term deployment of two of the Royal Navy’s Batch 2 River Class offshore patrol vessels (OPVs) to the Indo-Pacific region has put the global role of the class in the spotlight. 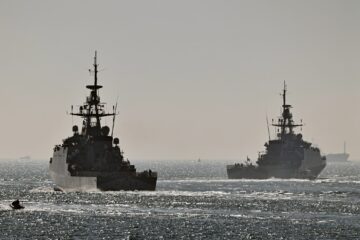