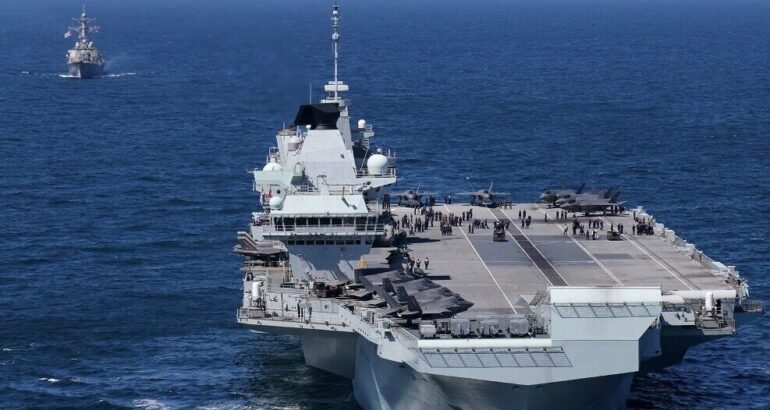 HMS Prince of Wales and HMS Queen Elizabeth pictured at sea for the first time with USS The Sullivans.

July 19th - The US Navy announced the participation of the USS The Sullivans in Carrier Strike Group 21, assuming its protection from aerial threats.

The UKCSG’s transit of the Mediterranean Sea provided an opportunity to train and exercise with our NATO Allies and regional partners to include operations with Italian and French Navies and Air Forces.

The first deployment of the UK Carrier Strike Group – CSG21 – is a historic achievement and the culmination of a decade-long bilateral carrier cooperation effort to deepen U.S. – UK interoperability in an unprecedented way.

The Royal Navy aircraft carrier HMS Queen Elizabeth (R08) serves as the flagship for CSG21. The deployment commenced in May 2021 from Portsmouth, UK, and includes operations in and transit through U.S European Command, U.S. Central Command, and U.S. Indo-Pacific Command areas of operation. Locations include the Mediterranean Sea, the Suez Canal, the Arabian Gulf, the Indian Ocean, and the Pacific Ocean.

U.S. Sixth Fleet, headquartered in Naples, Italy, conducts the full spectrum of joint and naval operations, often in concert with allied and interagency partners, in order to advance U.S. national interests, security and stability in Europe and Africa.

End of the press release