Thyssenkrupp Marine Systems has been shortlisted to prepare a concept design and feasibility study as part of Project MIECZNIK, the acquisition of multi-mission frigates for the Polish Navy.

“As a leading supplier of frigate warship technology to 19 navies worldwide to date, including 6 NATO navies, thyssenkrupp Marine Systems is proud to be able to offer Poland the MEKO® A-300 PL, our most up-to-date variant of the famous MEKO® technology frigate family.”

If selected, thyssenkrupp Marine Systems will form an enduring Technology Partnership with Polish industry for the building, integration and lifecycle support of the MEKO® A-300 PL frigates entirely in Poland. Partnering with the industry of other nations to build our designs is ‘standard practise’ for thyssenkrupp Marine Systems, with over 50% of our exported warships having been built by our customer shipyards over the years.

For record, an agreement was signed between the Armament Inspectorate and the Consortium PGZ-Miecznik for the delivery of three frigates for the Polish Navy within the program “Miecznik” on July 27, 2021.

At this occasion, the Polish Minister of Defence said: “These ships will be produced in Poland by a consortium. I said that I expect that the process of building these ships will be as fast, as efficient as in the case of the mine destroyers ‘Kormoran’”.

The program of acquiring new frigate class vessels for the Navy under the codename “Miecznik” is one of the projects of Technical Modernization Plan 2021-35.

The Minister detailed the work plan regarding the frigate acquisition program.

“By the end of November three conceptual projects will be prepared by the consortium. Then, no later than at the turn of this year and next year the best of the three concepts will be selected. As far as military requirements and costs are concerned, of course. Then, the consortium will start work on the technical design and later on the construction of the first ship. According to the adopted schedule, we want the first ship to be launched within four years.”

Regarding TKMS offer, no details have been unveiled yet on its technical specifications and its design.

Navantia has also been shortlisted with their offer based on the design of the F-100, in service within the Spanish Navy. 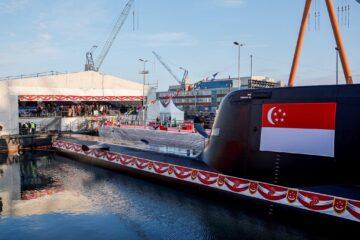