EGLIN AIR FORCE BASE, Fla. -- Three F-15E Strike Eagles from the 85th Test and Evaluation Squadron supported a test as part of the QUICKSINK Joint Capability Technology Demonstration on Aug. 26, 2021.

The goal of this test was to validate a new way to employ air-delivered munitions on ships that will change the maritime target lethality paradigm.

“For any large moving ship, the Air Force’s primary weapon is the 2,000-pound laser guided GBU-24,” said Maj. Andrew Swanson, 85th TES F-15E weapons system officer. “Not only is this weapon less than ideal, it also reduces our survivability based on how it must be employed. This munition can change all of that.”

A Navy submarine has the ability to launch and destroy a ship with a single torpedo at any time, but by launching that weapon it gives away the location of the vessel. The QUICKSINK JCTD aims to develop a low-cost method of achieving torpedo-like seaworthy kills from the air.

This test builds on a previous 53rd Wing test conducted last year where the B-52H Stratofortress from the 49th TES dropped JDAMs in order to assess the viability of specific maritime impact conditions.

Tayfun Ozberk 06 Mar 2022
The US Air Force Research Laboratory has released a video of the QUICKSINK concept, which proposes an unique way to sink enemy vessels by employing a seeker-fitted Joint Direct Attack Munition (JDAM). 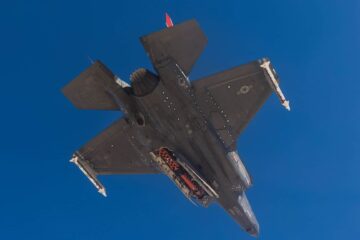 Naval News Staff 24 Feb 2021
Lockheed Martin was awarded a $414 million contract from the U.S. Navy and Air Force for Long Range Anti-Ship Missile (LRASM) production. This is the largest LRASM production contract in the history of the program.