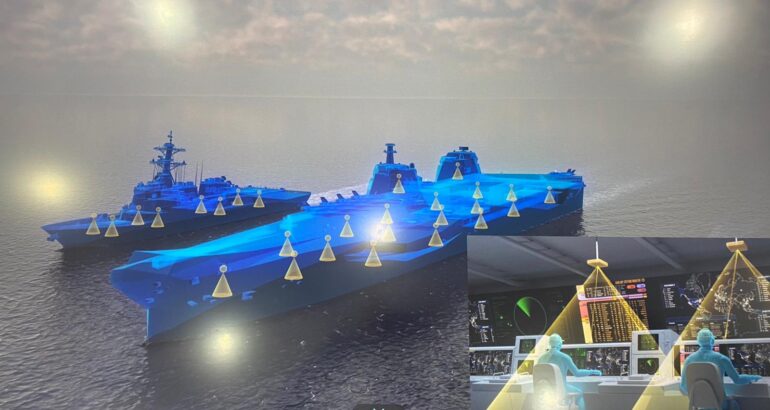 The Li-Fi communication system could be fitted aboard future vessels of the ROK Navy such as the KDX III Batch II and the CVX.

South Korea's Huneed Technologies and France's Groupe Latécoère showcased their Li-Fi (Light Fidelity) communication technology at ADEX 2021. The technology could be used for communication on Republic of Korea Navy vessels.

Huneed Technologies is a Korea-based company engaged in the provision of tactical communication equipment. The Groupe Latécoère is a leader in the field of Aerostructures and Interconnection systems based in Toulouse, France. The two companies announced strategic partnership on Li-Fi in commercial airplanes in October 2019. The Li-Fi technology, short for Light Fidelity, modulates light waves to transmit data.

“Li-Fi technology uses light instead of radio waves. This gives it a multitude of advantages over other communications technology,” a spokesperson for Huneed told Naval News.

Huneed Technologies and Groupe  Latécoère, on the one hand, and SK Telecom, on the other, are competing against one another to be selected as the supplier for communications systems on Republic of Korea Navy vessels. “Our system is much cheaper than the LTE alternative being offered by SK Telecom,” the spokesperson said.

Despite these advantages, the system still has its shortcomings. To begin with, if an object blocks the light from reaching the receiver, communication can be disrupted. Moreover, Li-Fi has limited range because the system is based on light.

“We’ve worked to attenuate these weaknesses,” the spokesperson continued. “Our latest system can emit light across a wide area so that communication will not be easily disrupted by objects. Moreover, we plan on increasing the system’s range to almost two kilometres within the next two years. This means that Li-Fi will even allow communication between ships, in addition to communication between different parts of a single ship.”