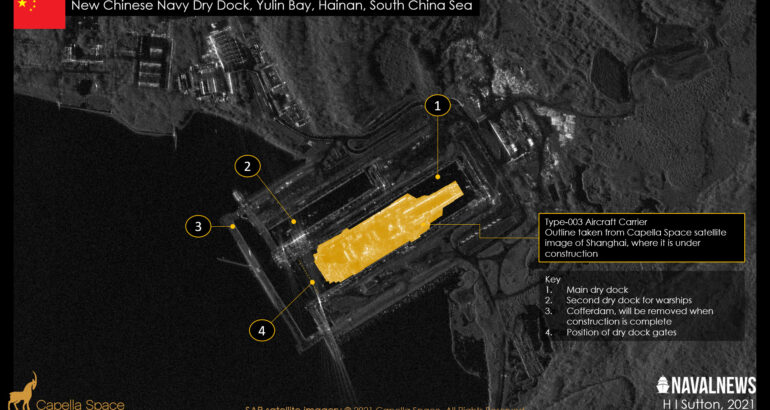 Click to Enlarge. The new dry dock on Hainan in the South China Sea is only just large enough for the Type-003 aircraft carrier. This suggests that future carriers will be the same size.

Aircraft carriers are at the vanguard of China's incredible naval expansion A new, larger super-carrier is being built near Shanghai. Analysis of radar satellite imagery shows that it is as large as China's new bases allow.

The growth of the Chinese Navy has been incredible. The PLAN (People’s Liberation Army Navy) is barely recognizable from itself twenty years ago. Among the most important developments have been aircraft carriers.

Defense analysts have been trawling open source intelligence (OSINT) to keep up with developments. But like much of China, the shipyard building the latest carrier is protected from traditional satellite observation by impenetrable cloud. A new commercial satellite has provided Naval News with a way to see through this cloud.

Seeing In The Dark Or Through Cloud

Using SAR (Synthetic Aperture Radar) satellites owned by Capella Space we have checked progress on the carrier. This radar imagery can see through the clouds, and at night.

Starting from 10 years ago with imported Russian technology, the latest design is starting to match the U.S. Navy’s super carriers. The PLAN now has two of the Russian-based carriers in service. And the third, the Type-003, is under construction near Shanghai. It is roughly comparable to the U.S. Navy’s Ford Class.

The SAR imagery picks out the three deck catapults, a major change from the Russian based carriers. Those rely on a ski-jump bow to launch aircraft. That works for the J-15 Flanker fighters but does not permit the KJ-600 AWE&C (airborne early warning and control) aircraft to operate. This new twin-prop plane closely resembles the E-2 Hawkeye and is seen as generally comparable to the latest models.

The new carrier as EMALS (electro-magnetic aircraft launch system), like catapults. This is the same technology tat the U.S. Navy is introducing with the Ford Class. It means that the KJ-600 can be operated. And it should improve the endurance of carrier borne fighters. In particular, a new stealthier carrier fighter is expected.

Progress appears steady at the Shanghai yard. Another ship which was recently in the same dry dock, but nearer the river, has been moved. This was blocking the entrance of the dry dock so is a necessary step before the carrier is launched.

We do not believe that launch of the carrier is imminent however. This is because sections of a container ship have been moved into the dock behind the carrier. Two massive holes providing access to the inner workings. This is normal for aircraft carrier construction and the same can be seen on U.S. ships.

Analysis of the imagery also reveals insights on other warship programs. A number of the large hovercraft intended for amphibious ships are still present in the basin, along with other naval vessels.
Of particular interest however, the unique ‘Sailless’ submarine does not appear to be present. Analysts will be watching this submarine closely for signs of it entering operational service, or being moved to a research unit.

1,900 km (1,200 miles) further south, at Sanya on Hainan, work is continuing on a gigantic dry dock for the carriers. The facility is strategically located for access to the South China Sea. One carrier, the Type-002 Shandong, is already based there, together with most of China’s nuclear submarine fleet.

A large cofferdam was built in 2016-17 to keep the sea out while construction took place. The docks are now clearly visible in the SAR imagery. Measurements confirm that the new Type-003 aircraft carrier will be able to fit it. However it’s tight beam suggests that China does not have plans for substantially larger carriers.

Importantly, the largest new dock is only about 80 meters (268 feet) wide, which is the same as the docket where the Type-003 is being built. The Type-003 itself is also approximately 80m wide (our earlier estimates were slightly narrow as it turned out). This suggests that a) the Type-003 will fit inside the new dock, b) any new carrier cannot be any wider if it too is to fit.

Therefore it seems likely that the Type-003 represents the ‘full size’ Chinese aircraft carrier for the foreseeable future. The next ones may be longer, or greater displacement, but not wider. If they are, yet more infrastructure may need to be built.

The new aircraft carriers represent a significant increase in capabilities for the Chinese Navy. And also part of their emergence as a true blue-water force.