Home» News»KAI unveils new MUM-T UAV at ADEX 2021
MUM-T UAV on KAI stand at ADEX 2021. Click the photo to enlarge and note in the background the MAH helicopter fitted with MUM-T launchers (under pylons and on the side of the fuselage). Juho Lee picture.

The new UAV was showcased on the KAI booth next to a full scale model of the MAH helicopter, the armed variant of the Marineon helicopter (which is the amphibious variant of the KUH-1 Surion helicopter). The MUM-T was also showcased on the helicopter itself: Four canister launchers (for one UAV per canister) were fitted on the MAH full scale model which was also unveiled for the first time at ADEX 2021. The MAH was selected as the Republic of Korea Marine Corps (ROKMC)’s future attack helicopter in April this year.

Talking to Naval News at the show, a KAI spokesperson explained:

“The MUM-T we offer will provide similar capabilities to the Air-Launched Effect vehicles being designed in the United States. Helicopter pilots and people on the ground will be able to communicate with this UAV.”

According to him, the MUM-T will be able to fly for two hours and have a maximum speed of 150 km/h. It will be available in four different modules, each designed for one of the following four roles: reconnaissance, electronic warfare, deception, and suicide missions. “We can put three kilograms or ordnance on this UAV if required,” the KAI spokesman added.

Development for the ground-launched version will take place first. “We plan on testing out the MUM-T’s software by the end of the year. This will help us make the vehicle interoperable with existing platforms,” the spokesperson continued. “Development for the helicopter-launched variant, for use on aircraft such as the armed Marineon, will take place in the mid to late 2020s.”

Naval News understand a total of 17 MUM-T launchers may be fitted on the MAH: 2×4 caniters under weapons pylons plus an additional 9 launchers on the side of the MAH’s fuselage. 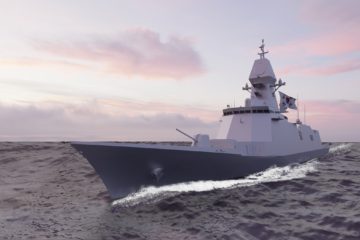