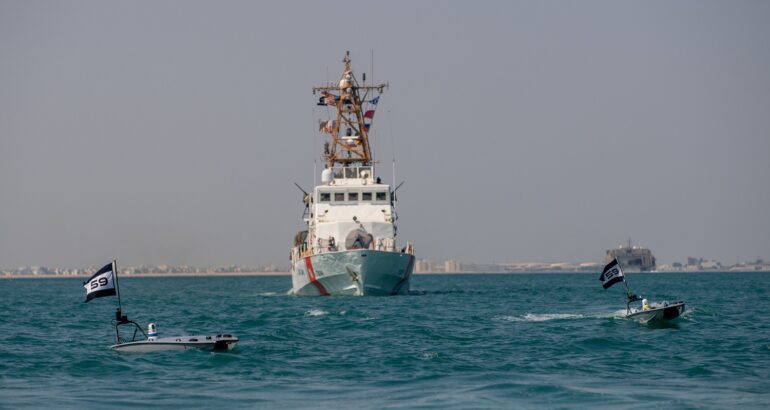 Both U.S. and Bahraini forces practiced operating the vessels in formation to strengthen mutual understanding and interoperability.

“This is a significant milestone for our new task force as we accelerate the integration of unmanned systems and artificial intelligence into complex, cross-domain operations at sea,” said Capt. Michael Brasseur, commander of Task Force 59. “Real-world evaluation is essential.”

The U.S. 5th Fleet area of operations encompasses about 2.5 million square miles of water area and includes the Arabian Gulf, Gulf of Oman, Red Sea and parts of the Indian Ocean. The expanse is comprised of 21 countries and includes three critical choke points at the Strait of Hormuz, the Suez Canal and the Strait of Bab al Mandeb at the southern tip of Yemen.

Task Force 59 was stood up just a couple months ago. With headquarters in Bahrain, it is the U.S. Navy’s first employment of unmanned aerial systems (UAS), unmanned sea vessels (USV), and unmanned underwater vehicles (UUV) in numbers that combine their capabilities with manned platforms for multidomain operations.

The MANTAS family of USV is a multi-role catamaran, proficient at performing in open ocean, riverine and inland waters delivering greater mission flexibility than traditional manned systems. They are designed and produced by Maritime Tactical Systems (MARTAC) of Melbourne, Florida. Besides the U.S. Navy, one of the military user of the MANTAS is the UK MoD who last year procured three MANTAS T12 for the Royal Navy and two for the UK Strategic Command.