Home» News»China’s Aircraft Carrier Killers, And Who Else Has Them 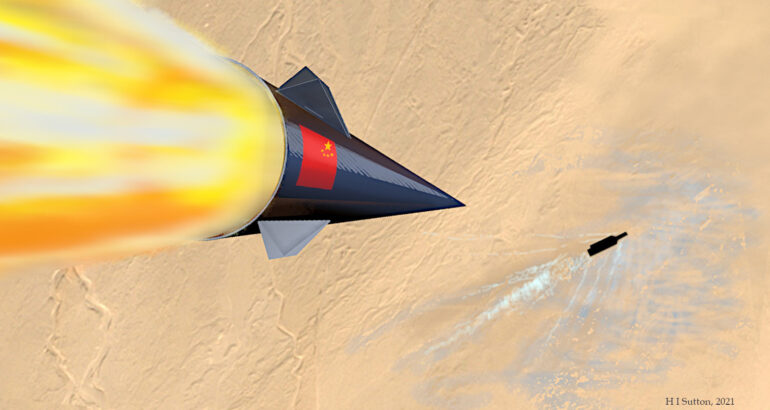 China has built a series of large-scale ship targets in the desert, including U.S. Navy aircraft carriers. Testing in the desert has some advantages compared to sea based targets. The takeaway is that China is serious about testing its 'carrier killer' capability.

Amidst the hype about hypersonics, behind the hysteria and sensational headlines, is a new type of weapon which could help reshape the naval arena. Anti-Ship Ballistic Missiles (ASBMs) pose an unpredictable threat to aircraft carriers and other high-value targets.

Earlier this month it was revealed that China has been building targets in the shape of U.S. Navy aircraft carriers in their remote deserts. Together with other targets, designed to represent American warships, they are believed to be part of the Chinese Navy’s Anti-Ship Ballistic Missile (ASBM) program.

This will provide the China with a potentially game-changing capability. It could inhibit the other countries’ ability or wiliness to employ aircraft carriers against them. Or certainly limit the way that they are employed and thus the tactical and strategic impact of them.

And China is not the only country working on ASBMs. Other countries, facing a resurgence of Aircraft Carriers, are developing similar missiles.

An ASBM starts its flight to the target following a ballistic trajectory. The path generally takes it into space before it returns to earth, re-entering the atmosphere at a steep angle. The final stage will have some form of Maneuverable Reentry Vehicle (MaRV). Therefore it can adjust its flightpath to hit the target which may have moved during the flight. The maneuvering flight path will also make them harder to intercept, thus increasing the threat.

Because they are going incredibly fast, over Mach 5, they are categorized as hypersonic weapons. And potentially some future designs may feature a hypersonic glide vehicle as the final stage. This has an aerodynamic form with wings which allows it to skim off the atmosphere, thus extending its range and making it even harder to intercept.

Why they are needed

Modern heavyweight torpedoes explode under the keel of a ship to ‘break it’s back’. It’s impressive, devastating, and likely to be enough to put a carrier out of the fight. But even with ever improving torpedoes, they are still relatively short ranged. And they need a submarine to be in the right place at the right time.

Mainstream anti-ship missiles tend to be small and are less likely to strike a catastrophic blow to large ships like a carrier (circumstances are of course everything!). Some missiles are larger, like Russia’s Granit, but even these have comparatively limited range.

There are ongoing improvements to mainstream anti-ship missiles in terms of range, targeting capabilities, speed and survivability. But designers have explored ASBM technology which takes these variables to new levels.

High speed is also valuable as it reduces flight time meaning that the target will have moved less during the flight. Blake Herzinger, who has written a book on China’s Anti-Ship Ballistic Missiles, estimates that a long range engagement may only take 25 minutes from launch to impact. In this time a carrier, even at 30 knots, could cover less than 13 nautical miles.

When added to the size of these systems, ASBMs should hit much harder than even the largest regular anti-ship missiles. All the same, Herzinger doubts that this could be enough, in a single strike, to sink a carrier. However “it is unlikely China would only launch one missile. Achieving a mission kill, rendering a carrier unable to launch or recover aircraft, is a distinct possibility for a successful strike.”

Anti-Ship Ballistic Missiles Around The World

China: The main and most often cited adopter of the technology is, China. They have developed at least three distinct weapons in the category. The ground-based DF-21D (CSS-5 Mod-4) was first delivered to the PLARF (People’s Liberation Army Rocket Force) around 2009. It has an estimated range of about 800 nautical miles and reaches speeds of up to Mach 10.

For the past five years or so the DF-21 series of missile has been complemented by the improved DF-26 (CSS-18). This has a much longer range, around 2,000 nautical miles. And significantly, the missile has several interchangeable payloads including both nuclear and conventional warheads. The anti-ship version is therefore just a configuration, and any DF-26 could be fitted for it in the field.

There is also the expectation that the ASBMs will be added to the latest Type-055 Renhai Class warship. Officially described as large destroyers, they are more aptly described as cruisers. Although the exact type of ASBM is not known in open sources, it is likely to be larger than the current missiles carried. This may mean that new launch cells need to be added, reducing the current 112-cell vertical launch system capacity. The new capability would likely more than make up for the reduction.

China is also believed to be working on an air-launched ASBM. A single round, the largest air-launched weapon in the world, can be carried under an H-6 strategic bomber. Very little is known about the missile itself but Herzinger suspects that it may be a variant of the DF-21. Air-launch will increase its range considerably, and potentially allow quicker reactions against time-sensitive targets.

How fast the they can react to newly identified targets is important. Targeting is one of the greatest challenges for any ASBM because of the extreme ranges involved. China appears to have adopted a large number of satellites to provide coverage of the vast Pacific Ocean. These could include Synthetic Aperture Radar (SAR) sensors to provide all-weather coverage.

Another country going the air-launched ASBM route is Russia. Some MiG-31 FOXHOUND fighters have been upgraded to carry the Kh-47M2 Kinzhal hypersonic missile. This Mach 10 missile has a reported range of around 1,100 nautical miles.

Iran has also been developing ASBMs, using its ground-based Fateh-110 missile as a base. The latest version of the Khalij Fars ASBM uses an infrared / electro-optical sensor for terminal guidance. Its range is claimed to be 380 nautical miles, which is less than the other systems described above. Its speed is also not hypersonic, being reported at Mach 3. So overall it is a less capable system on paper, but a serious threat all the same.

The final country to mention is India. The Dhanush ballistic missile is reported to have an anti-ship capability. It has a range of less than 200 nautical miles and but a very high terminal speed of around Mach 8-9. Launch is via a stabilized platform, typically occupying the helipad of the ship. This makes the system less flexible than some other systems.

The newer Agni-P intermediate-range ballistic missile is also reported to be capable of ASBM missions. This is currently a development test platform but if productionized will be a much more potent and versatile system than the Dhanush .

From a sea of disbelief, ASBMs are a being taken increasingly seriously. Particularly China’s ambitious program. Like any new weapons there will be challenges. And many systems may not be as capable in an operational setting as advertised. But the direction of travel is clear. And China seems determined to make it a reality.