This new program comes a few years after an initial order for 79 ships. It reaffirms Saudi Arabia’s confidence in the Couach shipyard’s ability to supply high-performance, robust ships.

The ships, designed and built by Couach, will carry out missions to protect sensitive infrastructure, protect maritime borders and fight piracy and smuggling, once accepted by the customer.

Since the start of construction in 2020, Couach has managed to keep the program’s projected schedule despite the effects of the Covid-19 health crisis, thanks to the commitment of all its teams. The production rate will soon reach its objective of one ship per month, with the last ship scheduled for delivery in early 2023.

For Couach, this program implies a workload of several thousand hours for all the company’s employees. Once the vessels have been delivered, Chantier Naval Couach will finally ensure the maintenance of the vessels in operational condition as well as all crew training operations for its client.

“The launch of this first vessel is, once again, a great testimony to the know-how of Couach and all its teams. In a few months, the shipyard has launched several military vessels, a yacht, as well as the first NSH1 of the new SNSM fleet, thus illustrating our successful diversification and the recognition of our “zero defect” model by our clients, whether they are state or private”.

Martin Manaranche 26 Jul 2021
Navantia has launched on July 24, the fourth of the five corvettes being built for the Royal Saudi Naval Forces (RSNF), named JAZAN as a tribute to this city in the Southwest of Saudi Arabia. 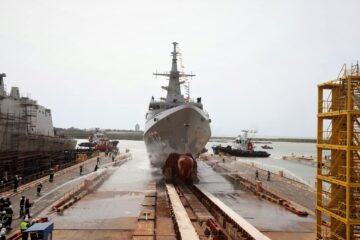 Naval News Staff 29 Mar 2021
Navantia on March 28 launched the third of five corvettes built for the Royal Saudi Naval Forces (RSNF) and named Ḥaʼil as a tribute to a city in north-western Saudi Arabia.