The French armament procurement agency (DGA) took delivery of the 'Arbalette' and 'Arquebuse', the first two new generation landing craft known as EDA-S. They were ordered in 2019 from CNIM for the French Navy and Army.

The EDA-S program is part of the renewal of the armed forces’ capabilities included in the 2019-2025 Military Programming Law (LPM) carried by the Ministry of the Armed Forces. The EDA-S replace the current landing crafts (also known as CTM) built in the 1980s.

Series production is being carried out in Saint-Malo (Brittany – West of France) by the French shipyard SOCARENAM, CNIM’s subcontractor for this project. The EDA-S program will support nearly 200 jobs at CNIM, SOCARENAM and their subcontractors.

The first two EDA-S will be delivered following a successful campaign of land and sea trials, which began in the summer of 2021 and was conducted by DGA experts with the support of the French Navy’s operational staff. These tests have validated the ability of the EDA-S to embark and disembark all types of transport vehicles and armored vehicles, including the heaviest of them (the Leclerc tank), whether on a beach, from a LHD or from a pier or an inclined ramp, day or night.

Eight EDA-S are intended for the Toulon amphibious squadron to replace the existing CTMs. The other six will be deployed overseas to replace various logistics barges: two in Djibouti, one in Mayotte Mayotte, one in New Caledonia, one in Martinique and one in French Guiana.

The EDA-S are compact vessels (length 28.8 meters / width 6.7 meters) allowing the LHD to embark up to four of them. The design of the EDA-S has three objectives: simplicity, robustness and reliability. Maneuvered by four crew members, they have a “Roll On – Roll Off” architecture: their two doors allow the vehicles to embark either from the front or the back on a working deck occupying the entire length of the vessel.

Their increased capacities, compared to the CTMs they replace, allow them to carry out deep-sea navigations and a wider range of activities. The EDA-S also allow a greater diversity of embarkation and offer a higher performance in terms of performance, both in terms of maneuverability and autonomy. 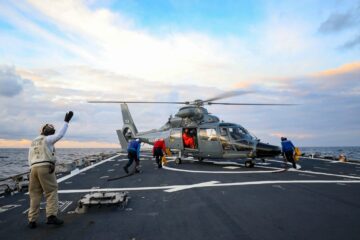 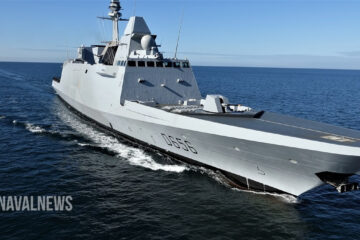