Home» News»STADT NAVAL approved as partner in the development of new MMPC
STADT NAVAL will be responsible for studies and basic design of electric power grid for hybrid and electric propulsion.

STADT NAVAL approved as partner in the development of new MMPC

STADT NAVAL has been invited and approved as a partner in the European Naval Industry Consortium led by Fincantieri, Naval Group and Navantia (coordinated by NAVIRIS) for the MMPC / EPC.

The consortium submitted a proposal to the European Defence Fund (EDF) for the MMPC-call earlier this month.

The Consortium aims to maximise synergies and collaboration between European shipbuilding companies and suppliers. Through conceptual studies and a design-phase, the consortium aims to develop a modular, flexible, energy-efficient, green, safe, interoperable, and cyber-secure naval vessel design for new European Patrol Corvettes (EPC).

As partner STADT NAVAL will be responsible for studies and basic design of electric power grid for hybrid and electric propulsion. Studies and design will incorporate main components like switchboards, electric drives, electric motors, and geared propeller solutions. Standard interface for integration and modularisation will be a vital part of studies and design.

Hallvard L. Slettevoll, CEO and founder of the STADT GROUP.

“ STADT NAVAL see the invitation and acceptance to become a partner in the European EPC consortium as a recognition of our more than 35 years of experience as an innovator and integrator within electric propulsion for the maritime industry. Our latest and disruptive Stealth Lean Propulsion® technology will form a vital basis to support the EPC project with Stealth, silent, highly efficient and future proof propulsion for the new European Corvette Vessels ”

The three European shipbuilders submitted their industrial offer for the MMPC project last week. As we repoted at the time, the “MMPC” term first surfaced in the European Defence Fund 2021 calls for proposals document first issued in October 202.

According to a Naval News source familiar with the matter, MMPC is not the new name for the EPC program. Rather, EPC is the name of the Pesco project (launched with support of EDA in 2019) with Italy, France, Spain, Greece (+ Portugal as observer). MMPC is the name of the 1st European Defence Fund call, launched in July 2021, covering the first phase of the program: up to initial corvette design + technological bricks. EPC remains the name of the three shipbuilders’ offer answering to the MMPC call, supported by co-funding Nations: Italy, France, Spain, Greece, Denmark and Norway.

Last month, STADT AS and SH-Defence announced that they signed a cooperation agreement to integrate their technologies to increase modularization of power generation and electric propulsion technologies. 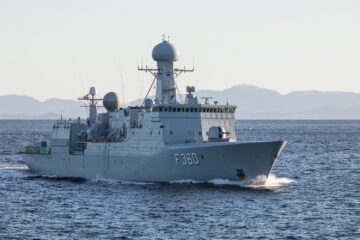 Naval News Staff 18 Oct 2022
In July 2022, the European Commission selected the proposal submitted by the consortium led by Naviris together with Fincantieri, Naval Group and Navantia for the Modular and Multirole Patrol Corvette (MMPC) call. Following this decision, the CEOs of the four companies signed a preliminary consortium agreement today at Euronaval, whose objective is to rule the execution of the call.