The indigenous 76mm naval gun firing test was attended by Turkey’s Minister of Defense, Hulusi Akar, as well as the echelon of command of the Turkish Armed Forces. Speaking at the ceremony, Minister Akar emphasized the obstacles faced during weapon and system procurements.

“Domestic and national production is not an option for us; it is a must. Even now, some of our demands are being postponed, unanswered, and work is being hampered, whether openly or implicitly, in relation to the numerous materials we are attempting to procure from our friends and allies. As a result, we confront a major limitation.”

After completing harbor and sea trials, the indigenous 76mm naval gun will enter service with the Turkish Navy by February 2022, Akar added.

Akar also praised MKE’s improving performance, which was shifted to an incorporated company a few months ago, stating that the company is still associated with the Ministry of Defense, but the new structure is expected to leverage its performance on future projects.

Officials did not name which ship would be mounted with the prototype gun. However, MKE’s General Manager Yasin Akdere stated in an interview with Defence Turkey magazine in November 2021 that the gun will be installed on a naval ship outfitted with the indigenous combat management system (GENESIS/ADVENT) in collaboration with the Turkish Navy. Naval News understands that the prototype gun would be tested on an Ada-class (MILGEM) corvette or a Perry-class frigate.

Though the indigenous 76mm naval gun was first unveiled during the IDEF-2021 defense industry exhibition in Istanbul in August, 2021, the project began in 2020.

‘Research and development took 12 months to complete. The current gun’s maker sought 8.2 million €, but the entire cost of the indigenous project is roughly 4.7 million €.

MKE is the project’s primary contractor. As subcontractors, three private sector companies have worked on the project. In addition to cutting the project’s cost in half, MKE claims that a unique coating added to the gun’s barrel will increase its life.

The indigenous 76mm Naval Gun, according to the company, distinguishes itself with features such as the ability to shoot a wider variety of ammunition than the Italian version, the ability to utilize special fused rounds, and its electro-mechanical structure that permits digital control.

The Turkish Naval Forces place a great value on the domestic production of the 76mm naval gun because it is the main gun of 32 warships, including G-class frigates, ADA-class corvettes, and fast attack crafts.

Developing 76mm weapons will also provide export opportunities for Turkey, which has recently extended its defense industry market. Turkey has been building MILGEM-class corvettes for the Pakistan and Ukrainian navies. As a result, after being field-proven, it appears feasible to sell MKEK 76mm guns to these countries. 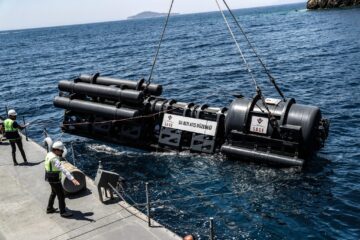