KUASAR MARIN, a Turkish defense engineering firm, unveiled on its social media accounts a new Swimmer Delivery Vehicle (SDV) project: The KM-STC10, It is intended for the Turkish special forces.

The primary role of KUASAR MARIN’s new vessel is to transport Turkish special forces personnel to the operation zone in the KM-STC10 submerged/semi-submerged/surface modes. STC stands for Subsea Transfer Craft.

To learn more about the project and the vessel, Naval News reached out to Mr. Noyan Kilinc, the company’s co-founder. In his remarks, Mr. Kilinc stressed that the KM-STC10 has been built to meet the RFI requirements of the Turkish Armed Forces and that it would be the subject of a future tender. However, the project’s timetable has not yet been released by the Turkish Ministry of Defence.

“The KM-STC10 was developed to address the RFI needs of the Turkish Armed Forces. Our project is a preliminary project that was developed with the use of the company’s own resources. The development and design process has been completed to the level where we will be able to bid on tenders for the needs of our country’s and friendly countries’ armed forces.”

In response to a question from Naval News on the development phase, Mr. Kilinc stated that concept studies had been conducted in order to provide features equivalent to similar vehicles around the world.

During the preliminary project phase;

“At this point, the production design process can begin by making design adjustments/adaptations in response to the clients’ additional/specific needs,” Kilinc added.

Kilinc also revealed the specifications of the vehicle. He said that the KM-STC-10 is a watercraft designed to cruise both above and below water. The lower portion of the boat shape is designed to be fast above water, while the upper part is designed to be minimal resistance underneath the water:

“KM-STC10 has the ability to operate at a depth of 30 meters with 4 knots. In the surface mode, it is able to reach 25 knots of speed. It moves using a water jet powered by a diesel engine above water and electric motors supplied by batteries below water.”

The KM-STC-10 will be controlled by two operators and can carry up to six special forces personnel. The diesel engine and certain other sensitive systems will be housed in the pressurized body, while the rest of the vehicle will be filled with water. The vehicle’s operators and special operations personnel will be connected to a central respiratory support system.

The KM-STC10 vehicle will include a Gyro, DGPS, DR Navigation System, Electronic Chart, and Sounder, as well as a VHF communication device. It will be outfitted with a night vision camera positioned on the flexible mast, thermal camera devices, and a hull-mounted forward-looking active sonar system.

KUASAR MARIN Engineering Inc. is a design and engineering firm based in Istanbul with a primary focus on the defense and shipbuilding industries. The company was created by retired Turkish Navy officers who contributed to the MILGEM corvette project. KUASAR MARIN is currently working on projects for Pakistan’s 3200-tonne Jinnah-class frigate and the Turkish Navy’s Offshore Patrol Vessel. 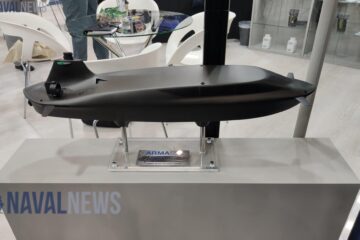